As promised, we resume with the second pair of 1965 Topps cards I received in a bundle of vintage Orioles from reader Bob. They're good ones too, bringing some real star power to my collection! 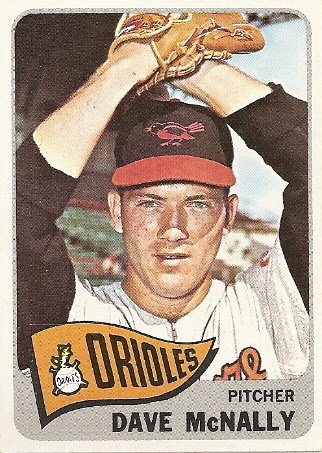 First up is a talented young lefty by the name of Dave McNally. He'd just finished his second full season in the major leagues, and was already showing signs of greatness. He'd dropped his ERA nearly a full run from 1963 to 1964 (4.58 to 3.67), and although he had yet to post a winning record, his three shutouts were third on the team in 1964 behind Milt Pappas and Robin Roberts; pretty good company, if you ask me. Better times were on the horizon for Dave, as he'd break out in 1965 with an 11-6 record and a 2.85 ERA for the Birds. In another year's time, he'd be on the mound for the team's first World Championship, slamming the door on the Dodgers with a 1-0 masterpiece in the clinching Game Four.

From 1968-1971, McNally won 87 games and lost only 31. He excelled in the postseason to the tune of a 2.49 ERA and 6 complete games in 14 starts. His grand slam in Game Three of the 1970 World Series remains the only granny hit by a pitcher in the history of the Fall Classic. Dave's place in Orioles lore is secure; his 181 wins rank him second in team history, as do his 33 shutouts. He places second in career strikeouts and complete games. He also made baseball history by winning a grievance against the Montreal Expos in 1975; he and Dodgers pitcher Andy Messersmith became baseball's first free agents. 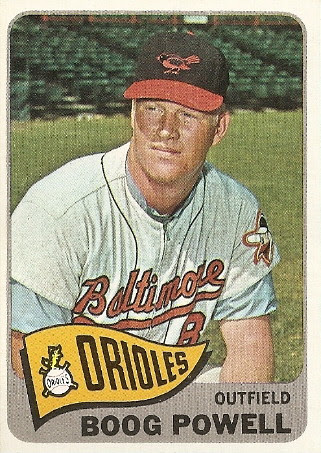 This is a gem of a card featuring one of the most popular players in O's history. You might notice that it lists Boog's position as "Outfield". Indeed, he came to the Orioles as a slightly trimmer left fielder. In 1965, he would split his time between the infield and the outfield before settling at first base in 1966 and staying there. I also love this card because it showcases the classic road jersey with "Baltimore" emblazoned in orange script. The disappearance of this design in the 1970s, and the decision to stay away from it in recent years, is a major bone of contention for the majority of the Charm City faithful. The cartoonish bird head logo on the left sleeve is a precursor to the Woody Woodpeckerish emblem that would make its appearance the following year.
You might have also noticed the #8 on Boog's jersey, which another great player would make famous in the coming decades. Orioles uniform numbers are sort of my thing, but this one has escaped me so far. I've found records indicating that he wore #30 as a rookie in 1961, #16 for his sophomore season in 1962, and switched to his familiar #26 from 1963 onward. That would seem to indicate that this is a Spring Training photo, and may even be a few years old. Baseball-Alamanac.com suggests that he wore #8 and #26 in 1964, but why would he have switched back and forth, having already worn #26 the previous year? If anyone has more info, let me know.
I've also written about my Dad's recent encounter with Boog over at my Orioles Card O' the Day blog.
Posted by Kevin at 10:25 AM No comments:

Today's entry was made possible by a very generous donation from reader Bob, who found my card blogs through my NumerOlogy website. (Psst, check it out if you haven't already.) He found my Topps Orioles Needs list in the sidebar and very generously sent me his duplicate Orioles cards from 1957 through 1983, a few hundred in total! Fortunately, there were four 1965 cards in the box he sent, so I'll be writing them up two at a time in the next two entries. Thanks again, Bob! 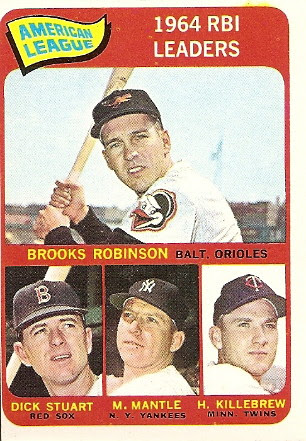 Wow, check out this murderers' row! Three Hall of Famers, plus "Dr. Strangeglove", one of the best nicknames in baseball history. 1964 was of course Brooks Robinson's MVP season, when he led the league in RBI (118) and placed second in batting average (.317) and tenth in home runs (28). It was the first of three straight top-three finishes for Brooks in MVP voting. You can read about my own personal encounter with him right here. As for the Mick, it's nice to finally have a vintage card featuring his likeness; I've really been getting burned out on Topps' flogging of #7 in their modern sets. Harmon Killebrew was in the prime of his career at this time; he had just hit 49 home runs, a high-water mark for him. "Killer" hit 40 home runs in five of his first six full seasons, in fact.
#94 Charlie Lau 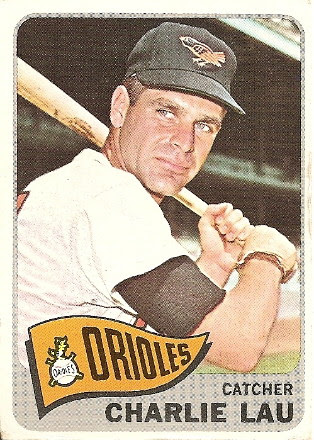 Check out that withering glare! I would not want to mess with Charlie. He was a reliable backup catcher for parts of eleven seasons, and did his best work with the bat in 1962 during his first stint in Baltimore. That year, Lau hit career peaks in the Triple Crown categories (.294, 6 HR, 37 RBI in 81 games). Most fans know Charlie best for his post-playing career as a hitting coach. His one-handed follow-through technique allowed maximum arm extension, enabling hitters to spray the ball all over the field. He became something of a guru, writing the book How to Hit .300 and working with the Orioles, Athletics, Royals, Yankees, and White Sox over parts of three decades. His most famous students include George Brett, Hal McRae, and Carlton Fisk. Other players (such as Frank Thomas) still use his methods today, nearly twenty-five years after he died of cancer.
Two more 1965 Orioles to come soon!
Posted by Kevin at 12:33 PM 1 comment:

Okay, my latest round of UPS stalking tells me that my package containing a jumbo box of 2008 Topps Series 1 and a jumbo box of 2006 Topps Series 2 (I threw that one in to reach the threshold for free shipping) is likely to arrive today, so I'd better knock this post out while I still have a chance. As the title suggests, these three cards arrived last week from Dave the Cardboard Junkie. I'd won my choice of several fabulous prizes for spotting one of the rogue 2006 Topps '52 Rookies in his 2007 pack rips on A Pack a Day. When offered, I will never turn down 10 Vintage Topps cards. In addition to some very cool Orioles, including a 1958 Gene Woodling, a 1970 ALCS recap card, and a fantastic 1973 Jim Palmer Boyhood Photo, there were the following:
#66 Bill Rigney 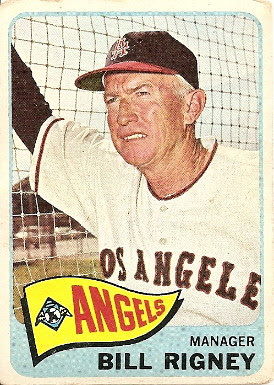 Bill is both my first manager and my first Angels card in the set. As you can see, the team was still known as the Los Angeles Angels, before they became the California Angels, then the Anaheim Angels, and most recently the insipid Los Angeles Angels of Anaheim. Just pick a name and stick with it! That uniform looks pretty sharp, though. Bill suffers from Sparky Anderson disease, in which the rigors of managing ages the subject terribly. Though I'd have pegged him as sixty-five years old at a glance, "The Cricket" was all of forty-six at the time of this photo. Yikes.
Bill served in the Coast Guard during World War II, which may have contributed to his late arrival in the big leagues as a player; he was 28 when he got his start with the Giants as an infielder. He hung around for eight seasons, hitting .259 overall and gaining an All-Star berth in 1948. Three years after his retirement, he became manager of his old team; in fact, he was the last manager of the New York Giants. Rigney was named Manager of the Year in 1962, when he guided the second-year Angels squad to 86 wins and a third-place finish in the American League.
#86 Les Narum 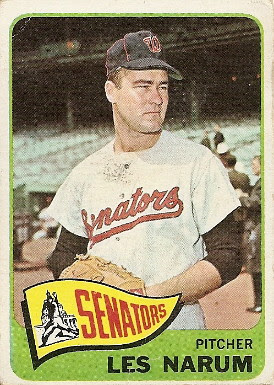 Hey, check it out, a former Oriole! Les actually went by "Buster" for most of his career, and broke in with the Birds in 1963, tossing nine nondescript innings in relief. However, he also hit a home run in his first major league at-bat, a two-run shot off of the legendarily ugly Don Mossi in what would be an 8-5 triumph for the O's. 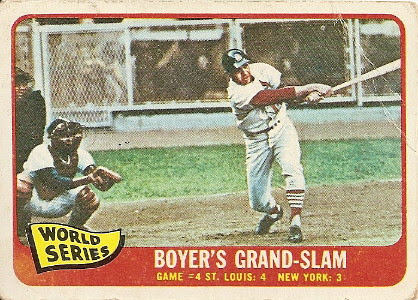 Hey, a World Series card! This is an amazing action shot of a great player; Ken was a five-time Gold Glover and a seven-time All Star while manning the Hot Corner for the Cards. This grand slam was one of Boyer's only big moments with the bat in a thrilling seven-game victory for St. Louis over the Yankees. However, it was a fitting cap to a season in which he won the NL MVP (.295, 24 HR, league-leading 119 RBI). I love Clete's striped stirrups; I think Anthony Reyes is the only current Cardinals player who shows off his stripes on a regular basis. Ken was the lucky one out of the baseball-playing Boyer brothers; you might remember his brother Clete as a solid third baseman for the Yankees, but older brother Cloyd pitched for the Cardinals as well. Clete is bad enough, but who in their right mind names a boy "Cloyd"? Did his father mean to say "Lloyd", but he coughed and the hospital secretary wrote it on the birth certificate like that?

I'll be back soon; another reader is generously sending me a few 1965 Orioles for my collection!