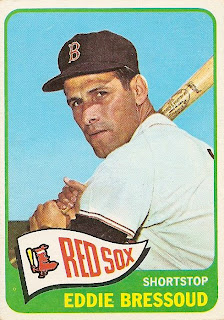 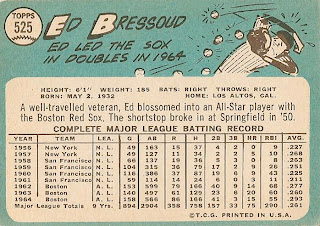 Here's the penultimate card in our long journey, and this time I'm serious. This is a visually striking card; you don't see many crowd shots in 1960's Topps sets. The blurry folks milling around in the stands behind Ron Perranoski make the player pop out in the foreground. I also like Ron's sideways glance, as though the photographer has been putting him through the motions for quite some time. A teammate passes, gives Perranoski a knowing smirk, and Ron shoots him a look that says, "Can you believe this guy? I just want to finish my warmups."

-Ron was born in Paterson, NJ (as Ron Perzanowski) and attended Michigan State University before signing with the Cubs in 1958.

-The Cubs traded him to the Dodgers in April 1960 as part of a three-for-one deal that sent Don Zimmer to Chicago. He debuted with L.A. a year later and was a bullpen fixture from the start, appearing in 53 games with a 7-5 record, six saves, and a 2.65 ERA.

-1963 was Perranoski's standout season, as he posted a 16-3 record in relief with 21 saves and a 1.67 ERA. He paced the National League in winning percentage (.842) and games pitched (69), and finished fourth in MVP balloting. In the Dodgers' World Series sweep over the Yankees, the lefty nailed down a save in Game Two by getting the final two outs in relief of Johnny Podres.

-As you might imagine, the career-long reliever wasn't much of a hitter. In 190 career plate appearances, he had a batting line of .096/.147/.114 with three RBI. However, he did hit a triple on September 4, 1966 off of the Reds' Don Nottebart. I would've liked to have seen him run the bases!

-Ron led the American League in saves in both the 1969 and 1970 seasons, with 31 and 34 respectively. Though the Twins captured the first two Western Division crowns in A.L. history, they ran into the Baltimore juggernaut in the postseason in each year. The league's top fireman allowed a total of eight runs in seven innings as the Orioles swept Minnesota twice.

-The final three years of Ron's career saw him move from the Twins to the Tigers, then back to the Dodgers briefly, before an eight-game stint with the Angels in 1973 signaled the end of the road. In 13 seasons, he was 79-74 with 179 saves and a 2.79 ERA.

This is the third-to-last card left for me to post...this time I mean it. I'm sorry that it's a checklist, but them's the breaks. Hey, at least it's unmarked! Savor the blank boxes. There's not a lot of star power on the front of the card, as Mudcat Grant, Willie Davis, and Elston Howard are the most notable names. The second half of the checklist for Series 6 is a bit glitzier, as the Braves Rookie Stars card featuring Phil Niekro, the Yogi Berra card, the Cardinals Rookie Stars featuring Steve Carlton, Nellie Fox, and Eddie Mathews all provide Hall of Famer cachet. You also get some very good players in the mix with Dick Allen, the Paul Blair/Davey Johnson Orioles Rookie Stars, Clete Boyer, Wilbur Wood, and Stu Miller appearing on the back. As I'm posting this card well after its acquisition, I can happily report that I have a perfect 77 out of 77 (100%) completion rate for the sixth series. Huzzah!

If you read my other blog, you'll know that I got engaged this past Wednesday, so this is a celebratory Friday evening post. If you don't read my other blog, why the heck not? Today we take a peek at Nick Willhite, whose first solo appearance on a Topps card is this one. In the 1964 set, he shared a two-player Rookie Stars card with fellow Dodger Dick Nen. Nick and Dick! Dick and Nick! (Yes, I really am this giddy.)

-Willhite debuted with the Dodgers in a big way, tossing a five-hit, six-strikeout shutout against the Cubs on June 16, 1963. It proved to be his only shutout in 29 career starts.

-The Senators purchased Willhite's contract from the Dodgers in October of 1964, but sold him back to L.A. the following May after he allowed 11 runs (five earned) in five relief appearances.

-Although Nick saw regular-season action for Los Angeles in their World Series-winning seasons of 1963 and 1965 and their pennant-winning season of 1966, he never appeared in a postseason game.

-Willhite later went into coaching, instructing pitchers at Brigham Young University as well as stints in the Brewers and Yankees farm systems.

-By the late 1980s, Nick was thrice-divorced and living on the streets of Salt Lake City. He reached out to former teammate Stan Williams, and was able to obtain treatment for drug and alcohol addictions through the Baseball Assistance Team.

-Willhite became an addictions counselor after his own successful rehabilitation. In December of 2008, he died of cancer at age 67 in his son's home in Alpine, Utah.