Before I get started on the first of three cards I acquired in a trade with reader Bobby, I'd like to bring your attention to a couple of links that "The Commish" dug up on Ken Retzer, the subject of our last card. Great stuff, including Ken's meeting with John F. Kennedy and his claim to fame: he caught the first pitch of the 10,000th game in MLB history! Thanks, Bob.
Alright, from Bob back to Bobby, who proposed a 3-for-3 trade. I sent him three Orioles: a 1991 Donruss #23 Gregg Olson (Diamond King), a 1989 Donruss #44 Pete Harnisch (Rated Rookie), and a 1984 Topps #240 Eddie Murray. First we're going to deal with Bill Spanswick, who has an excellent Dickensian sort of name. If he had been born in Nineteenth Century London, he might have been a cockney bootblack or a pickpocketing tramp, but it was his good fortune to be born in 1938 in Springfield, Massachusetts (home of the Basketball Hall of Fame and birthplace of Dr. Seuss and Kurt Russell). 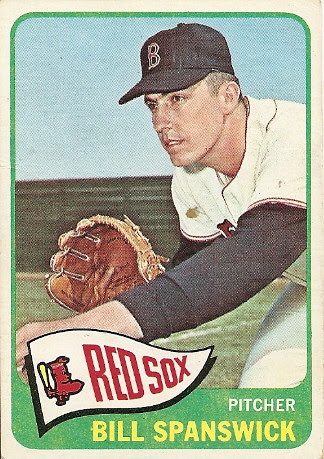 Bill was a one-year wonder, and that's being kind. His 6.89 ERA in 65 and one-third innings in Boston leave little doubt as to why the 1964 season was his first AND last in the majors. Perhaps he should have given things a try at another position, though: he swatted 4 hits in 14 at-bats that year, driving in two and walking twice for a .286 batting average and a .375 on-base percentage.

Spanswick may have spent six seasons down in the minor leagues before getting the call to Fenway Park, but he had some share of glory in those years. He led his league in strikeouts at least twice (Nebraska State League in 1958 and Pacific Coast League in 1963). With Lexington in 1958, he struck out 22 batters in a one-hitter, and later topped that total with a 24-K, 14-inning effort!

Fun fact: Bill got his second (and final) win without breaking much of a sweat. In Game One of a doubleheader against the Indians, starter Jack Lamabe gave up a two-out double in the seventh inning to Dick Howser, scoring Al Smith with the go-ahead run. Spanswick came in to relieve Lamabe, and got Vic Davalillo to ground the ball back to him for the final out of the frame. Russ Nixon singled to lead off the home half of the seventh. With Spanswick due up, manager Johnny Pesky sent Chuck Schilling to pinch-hit. Schilling bunted the runner to second, and two batters later Felix Mantilla put the Red Sox ahead with a two-run home run. Dick Radatz shut the door with two hitless innings and added an RBI single to boot! 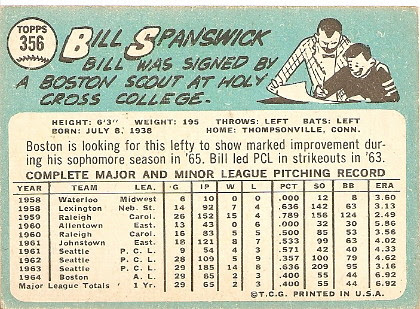