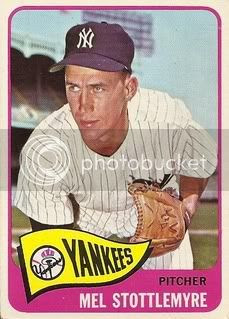 I'm a few weeks overdue with this post, but getting there is half the fun. Our old friend Bob, a.k.a. the Commish, sent me this lovely specimen of a high-numbered Mel Stottlemyre rookie card. If you've skimmed over my checklist lately, you know that this was the last single-player card that I needed...besides that Mantle guy. There's no turning back now!

-Mel was born in Hazleton, MO but attended high school and junior college in Washington state before signing with the Yankees in 1961.

-He led the International League with a 1.42 ERA for Richmond and was 13-3 when New York called him up to the majors in August 1964. The rookie helped the Yanks capture the American League pennant with a 9-3 record and a 2.06 ERA in 13 games down the stretch, solidifying his place in the bigs for good.

-On September 26, 1964, Stottlemyre tormented the Senators by tossing a 2-hitter and going 5-for-5 at the plate with a double and a pair of RBI.

-Mel started three games in the 1964 World Series, earning a complete game victory in Game Two, permitting just two runs (one earned) in a seven-inning no-decision in Game Five, and unfortunately taking the loss on two days' rest in the deciding Game Seven. It would be his only postseason exposure.

-In his sophomore season, he made the first of five All-Star teams, posted a 20-9 record with a 2.63 ERA, and led the league with 18 complete games.

-Stottlemyre spent three decades as a pitching coach for the Mariners, Mets, Astros, and Yankees. He oversaw the Bombers' staff while they were busy winning five World Series at the end of the 20th century.

-Mel was diagnosed with multiple myeloma a few years back, but the disease is now in remission. He lives in Issaquah, WA. 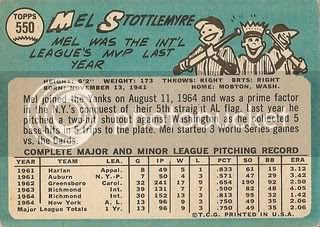