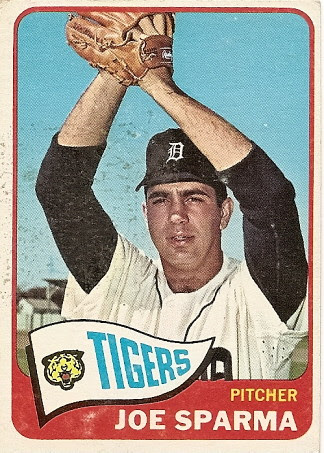 Having returned from vacation and other distractions, I can finally bring you the third and final card from my trade with Bobby. Righthanded pitcher Joe Sparma has one of the more fascinating stories I've encountered in writing this blog. He first gained notoriety as the star quarterback for coach Woody Hayes' Ohio State University Buckeyes in the early Sixties. Teaming with receiver and future NFL great Paul Warfield, Sparma delivered a Big Ten championship in 1961 (8-0-1), highlighted by a 474-yard performance in a 50-20 win over Michigan. But the quarterback didn't see eye-to-eye with Hayes, and quit the team after three years to play professional baseball.

This card is Sparma's rookie issue from Topps; he had signed with the Tigers in 1963, earning a $32,ooo bonus. 1965 would be his first full season in the bigs, and an early thrill came when he started against the Yankees on Mickey Mantle Day in New York. When #7 stepped to the plate for the first time, Joe stepped off of the mound to shake Mantle's hand and tell him how much he admired him. He then proceeded to strike out the Mick, who lamented to catcher Bill Freehan that Detroit manager Mayo Smith didn't start a soft-tosser to let the Yankee star look like a hero.

After a career year in 1967 (16-9, 3.76 ERA, 5 shutouts), Sparma clashed with Mayo Smith, and was eventually demoted to the bullpen in the midst of the 1968 season. (I'm noticing a trend here.) He'd complained to reporters after being removed from a game, claiming that Smith didn't respect or trust him. The skipper's diplomatic response was that he "didn't want to get into a spitting contest with a skunk". After sitting for the first two weeks of September, Joe finally got another start and clinched the American League pennant by tossing a complete-game, five-hit effort to beat the Yankees. In the World Series, Smith seemed to hold on to the grudge, using the pitcher just once in relief in a thrilling seven-game battle with the Cardinals. Though the Tigers were victorious, the bad blood remained. Eventually the Tigers dealt Sparma to the Expos, where he lasted just nine games (0-4, 7.06 ERA) before calling it quits in 1970. He was only twenty-eight.

Joe Sparma suffered a heart attack in 1986 and passed away prematurely (age forty-four) due to complications from triple-bypass surgery.

Fun fact: According to former Sparma roommate (and battery mate) Bill Freehan, Sparma had ESP. Occasionally he would wake up on a day that he was scheduled to pitch and tell Freehan that he had a good feeling. Whenever he said this, the Tigers would win. Once he predicted that infielder Dick McAuliffe would have a 3-for-5 day at the plate. After starting out 3-for-4, McAuliffe struck out in his fifth at-bat and blamed Sparma for jinxing his final plate appearance! Talk about being ungrateful. 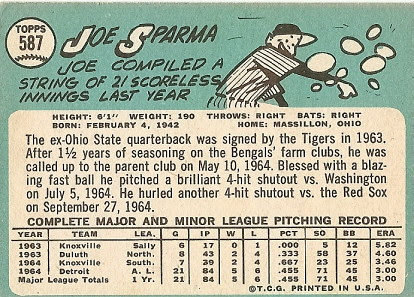 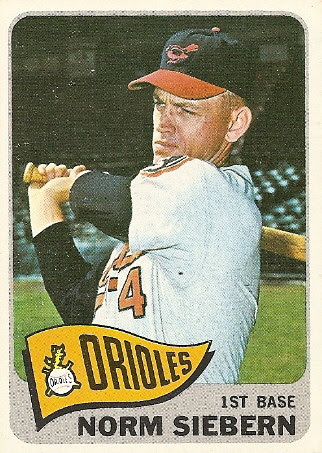 Hey, it's another Oriole! This card was also part of my trade with Bobby. It's kind of funny to see an O's player wearing #4, which of course has been retired for Hall of Fame manager Earl Weaver since he called it quits in 1986. Norm was just one of six players to sport the number in Baltimore, the most renowned of which was slugging first baseman "Diamond" Jim Gentile, who the Birds traded to Kansas City to acquire Siebern! Of course, being traded for heavy hitters was nothing new for Norm; earlier in his career, the Yankees had sent him to the A's for Roger Maris.

Norm Siebern was a pretty good hitter, grabbing attention during his three straight All-Star seasons (1962-1964). His final season as an All-Star was his first in Baltimore, when he hit just .245 but still had an above-average OPS+ on the strength of 106 walks (compared to only 117 hits). His most impressive season with the bat was probably 1962, when he hit .308 with 25 home runs, 117 RBI, and 110 walks for a putrid Kansas City Athletics team that lost 90 games. He was the only one of Charlie Finley's men to drive in 100 runs, and the only one to score 100 times himself. But Norm was no slouch with the leather either, winning a Gold Glove as a left fielder during his first full season (1958).

Fun fact: In the aforementioned Maris trade, one of other players the Yankees swapped to the A's was Hank Bauer, who would become Norm's manager in both K.C. and Baltimore. 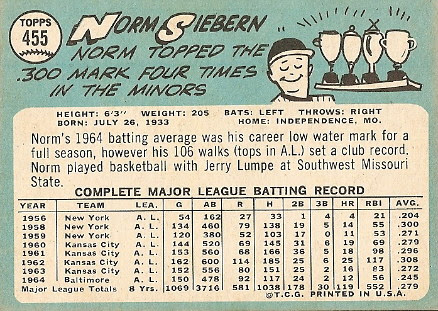