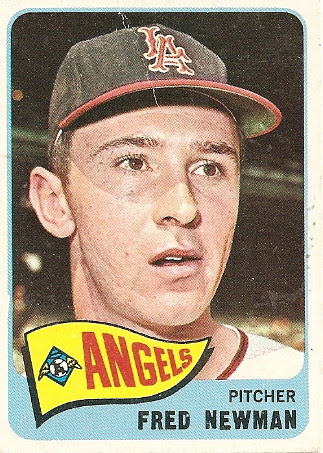 Card number three from reader Ed is another Angel. Has any team had a greater identity crisis than the Los Angeles/California/Anaheim/Los Angeles of Anaheim Angels? All of the commotion about the team's hometown is only further complicated by the fact that they played their home games in 1961 at Wrigley Field! (Obviously, it was another stadium in L. A. that shared a name with the Cubs' home field.)

Signed out of nearby Brookline High School as an amateur free agent by the Red Sox, Fred Newman was taken by the Los Angeles Angels in the expansion draft less than a year later. Fred is looking rather baby-faced in this photo, most likely because he was twenty-two in 1964. Newman's best pitch may have been his sinker, and he was known for his excellent control, which helped him win 13 games in 1964, his first full season in the majors. He sported a 2.75 ERA and allowed less than a hit per inning. He was just as good the following year, allowing just .86 hits per inning and posting a 2.93 ERA. The finest game of his career may have been a 5-0 victory over the Twins on June 30, 1965, in which he allowed just two hits and one walk while going the distance. However, the Angels' quiet bats handed him several tough-luck losses, and he finished with a 14-16 record.
Unfortunately, arm troubles brought Fred's promising young career to a premature end two years and 24 games later. His life game to a similarly premature conclusion, as he died in a car accident in 1987 at the age of 45.
Posted by Kevin at 11:28 AM 4 comments: 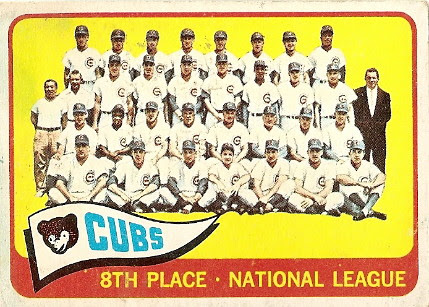 Here's another of the cards I received from reader Ed. This is my first team card for the 1965 Topps set, and it's a beauty. Sure, the team itself was a bottom feeder; their 76-86 won-lost record wasn't terrible, but this was the season in which an amazing pennant race saw the top five teams finish within five games of each other. But those classic Cubbie unis still look sharp, as does the old-school Cub head logo in the pennant. As the son of an art teacher, I'd be remiss if I didn't mention the excellent use of primary colors on this card. The club was managed by Bob Kennedy, who played on the first Orioles team in 1954. His son Terry was a catcher for the O's in the late 1980s. Kennedy was the Cubs' first conventional manager after the "College of Coaches" debacle in the early Sixties.

The card (and the team) features 33-year-old first baseman Ernie Banks (23 HR, 95 RBI), left fielder Billy Williams (.312, 33 HR, 98 RBI), and third baseman Ron Santo (.313, 30 HR, 114 RBI). The first two are Hall of Famers, while Santo's worthiness is still hotly debated. Speaking of Hall of Famers, a struggling young outfielder named Lou Brock was traded to the Cardinals in June for pitcher Ernie Broglio. Hindsight has proven that deal to be a big win for the Redbirds, of course. The pitching staff was led by veteran Larry Jackson, who won a career-best 24 games to lead the National League and sported a 3.14 ERA. Jackson finished second in ML Cy Young voting (back in the days when one award was given for the entire major leagues) to the Angels' Dean Chance, who won 20 games with a miniscule 1.65 ERA.

In looking at the 1964 Cubs roster, my favorite quirk is that there were two Burdettes on the pitching staff - former Braves star Lew and reliever Freddie - who do not seem to have been related to each other.
Posted by Kevin at 8:48 PM 1 comment: 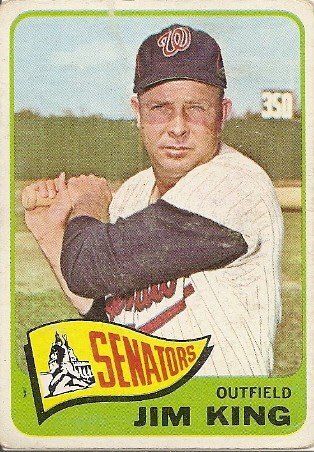 This is the first of nine cards that I recently received from reader Ed. Jim King was actually one of the original new Washington Senators...that is to say, when DC received a new expansion team before the 1961 season, they drafted him from the Cleveland Indians. King is shown here taking a mighty cut, which was his calling card as a player. He had his best seasons in Washington, clubbing a personal-best 24 home runs in 1963 and following up with another 18 in 1964. For his career, he reached double digits in roundtrippers eight times. Though he didn't hit for average (.240 career), his penchant for extra base hits and his good batting eye (363 walks and 401 strikeouts) made him a valuable contributor: his career OPS+ was 104, placing him just above the league average. In 1967, which proved to be his final season in the bigs, he was traded from the White Sox to the Indians for another slugger at the end of the line: outfielder Rocky Colavito.
Posted by Kevin at 1:44 PM No comments: