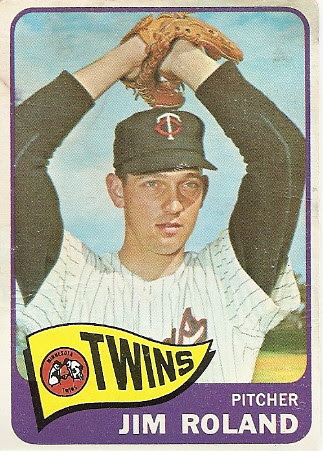 Coming 'atcha with another card from reader Ed. There's not a lot of information on Wikipedia or Baseball Reference, so Jim Roland's stats will tell the story. Though the card back below mentions his impressive first start with the Twins, a three-hit, nine-walk effort, he made a career out of solid bullpen work. Only 29 of Jim's 216 appearances came as a starter. Pitching most of his career with Minnesota and Oakland, he crafted a 3.22 ERA that was above league average. It's amazing that he gave up such a relatively low amount of runs, because those nine walks in his starting debut were indicative of his tendencies. He struck out 272 and walked 229 in 450 and one-third innings, a K/BB ratio of just 1.18. His saving grace was a decent hit rate; until his final season, he never gave up more hits than innings pitched.

FUN FACT: Jim Roland had exactly one run batted in over 84 at bats during his career. It was a walk-off walk: bases loaded, two outs, bottom of the fourteenth inning against the Tigers. Detroit had intentionally walked Johnny Roseboro to get to Roland, a career .071 hitter. Way to make it count, Jim! 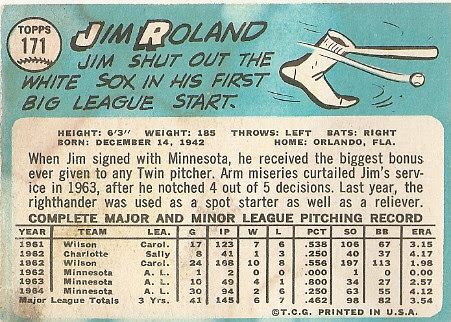 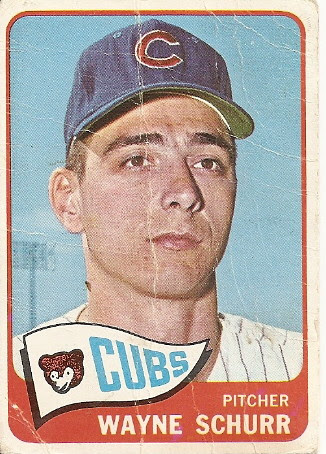 The next card from reader Ed was this creased masterpiece of Cubs rookie righty Wayne Schurr. You may be surprised to learn that this was Wayne's only baseball card; after a decent debut with the North Siders in 1964 (he actually pitched 48 and one-third innings, contrary to the stats on his card back, which makes his ERA 3.72 - the league average was 3.71), he never pitched in the majors again. Even stranger, he started that lone season with the Cubs, and was optioned to Salt Lake City in late July. The last traces of him that I found were a transaction in December 1966, when Chicago sent him to the Angels as part of a four-player deal.

But don't cry for Wayne. An autographed copy of this card can be found on eBay, where bidding has reached $8.16. Not too shabby for a one-year wonder. Or you can get a graded card (9 Mint!) for the Buy It Now price of $65. Since I have nothing else to add, check out the great caricature of Wayne as a cowboy pitcher on the card back below. 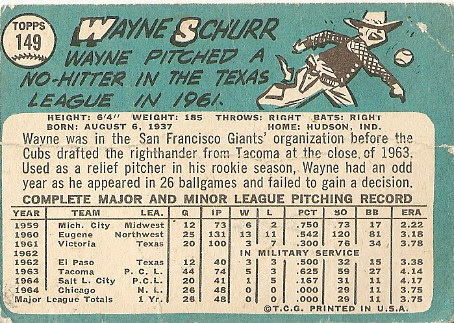 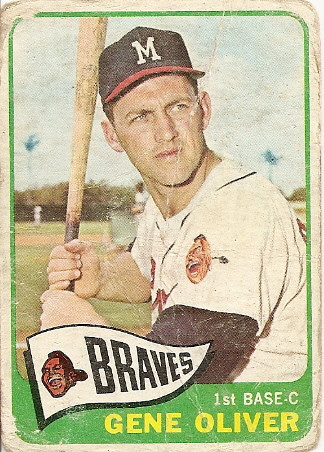 This is another card that I was sent by reader Ed. As you can see, it has withstood the test of time, even though it's been battle-tested more than most of the other cards in my growing collection. Gene Oliver had a pretty interesting career. He was signed by the Cardinals in 1956 out of Northwestern University, where he had been a scholarship athlete in football. Gene was primarily a catcher, but also was a decent first baseman and serviceable outfielder. His longball power was his calling card, as he slugged 151 home runs in five-and-a-half minor league seasons. He led his league in deep flies three times, as you will see below on his card back. (Thanks to reader Mr. Schwartz for the excellent suggestion to scan the backs as well. I've been remiss in not sharing these great cartoons and stats with you; the minor league numbers especially are not available online.) 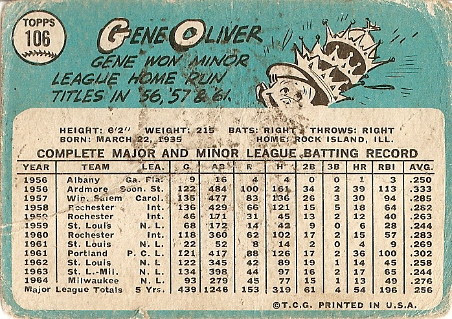 As you can see, Gene still showed some pop by the time he finally got playing time in the majors; he didn't stick around for a full season until he was 27. But 1965 would be a career year for Oliver, as he hit .270 with 21 home runs. He was one of six Braves to go deep 20 times or more , joining Hank Aaron, Eddie Matthews, Joe Torre, Felipe Alou, and Mack Jones. He struggled following the team's move to Atlanta, but did become the first player to hit 3 round-trippers in a single game at Fulton County Stadium as part of a 4-for-4, 7 RBI performance. The following season, he was traded to the Phillies for the one and only Bob Uecker. It was actually a fitting trade, as Oliver reportedly was a ukulele player and kept his teammates loose with his sense of humor.

Perhaps Gene's most impressive legacy as a big leaguer is his .409 career batting average against Dodgers great Sandy Koufax. He is the only man to top .400 against Koufax in more than 50 career at-bats. Gene Oliver passed away in March of 2007 after undergoing lung surgery. He was 71 at the time.
Posted by Kevin at 4:12 PM No comments: