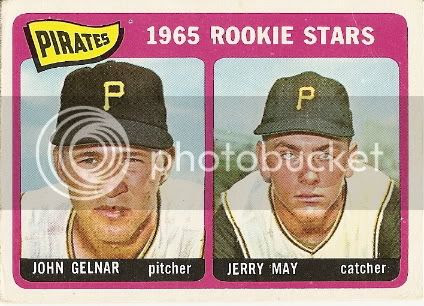 I am fairly confident that the marks on John Gelnar's face are just decades-old schmutz on the card and not some really unfortunate skin condition, but there's no way to be certain. Such is life.

-Hailing from Granite, OK, John attended the University of Oklahoma before signing with the Pirates in 1963.

-After a strong year-plus at his first minor league stop in AA Asheville, he made his major league debut at age 21 in August of 1964, allowing five runs in nine innings over seven games.

-Spent four more years in the Pittsburgh organization with only a brief and unsuccessful stint in the Bucs' bullpen in late 1967 to show for it.

-Was dealt twice in the 1968-1969 offseason, first to Kansas City and then to Seattle. The Pilots acquired Gelnar and outfielder Steve Whitaker in exchange for Lou Piniella, who would win Rookie of the Year honors with the Royals.

-Was effective but unlucky with the expansion Pilots, winning three and losing ten despite a spiffy 3.31 ERA. He also saved three games.

-Had the unusual distinction of losing consecutive games to the Twins, the first in relief and the second as a starter. On July 19, 1969, he entered in the 17th inning and allowed four runs in the 18th in a game that lasted 5:41. He bounced back on Sunday, July 20 with seven innings of one-run ball before crumbling in the eighth, surrendering two more runs without recording an out.

-Fared a little better in wins and losses as the club moved to Milwaukee the following year; went 4-3 with four saves and a 4.19 ERA in 53 games of relief.

-Was hit hard in two games early in 1971, and soon thereafter the Brewers traded him to Detroit. He spent the rest of the season in the minors, and after another subsequent season at AAA in the Minnesota organization, he hung up his spikes at age 29. Finished 7-14 with a 4.18 ERA and seven saves in parts of five major league seasons.

-John now works as a rancher in Hobart, OK.

Fun facts about Jerry May:

-Born in Staunton, VA, Jerry was signed by Pittsburgh scout Syd Thrift in 1961. Thrift would later serve as GM of the Pirates and Orioles.

-Never did hit at the higher minor league levels, but earned a major league roster spot based on his strong defense behind the plate.

-Drove in the only run in a 16-inning game on September 30, 1964. His bunt single capped the first 3-hit game of his career and mercifully hastened the end of a game in which an N.L.-record-tying 36 batters struck out.

-Hit a pinch hit grand slam on June 8, 1969 to give the Pirates a 10-9 lead over the Braves in the seventh inning. Atlanta would reclaim the lead for good with a Hank Aaron home run in the eighth.

-Lost his spot in the lineup on July 14, 1969, when he crashed into the dugout at Montreal's Jarry Park and hurt himself. He was further injured on the way to the hospital, when his ambulance collided with another vehicle, damaging his shoulder. Manny Sanguillen supplanted him, and the Pirates dealt may to the Royals prior to their 1971 championship season.

-Failed to sniff the Mendoza line in the following two seasons with Kansas City and the Mets, bringing his career to an end at age 29.

-His life was cut tragically short at age 52 in a farming accident at his home in Harrisonburg, VA. 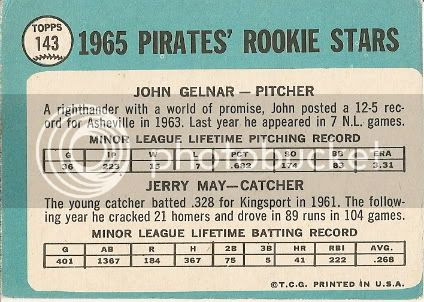 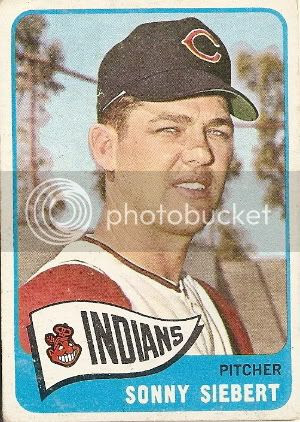 I think that Sonny Siebert sounds like a name you'd hear on The Andy Griffith Show. But nobody cares what I think.

-A native of St. Mary, MO, Sonny attended the University of Missouri. He was pursued by the NBA's St. Louis Hawks, but ultimately signed with the Indians in 1958.

-The Tribe initially saw him as an outfielder, but converted him to a pitcher in 1960. Within two years, he was a 15-game winner at class A Charleston. In another two years, he was in the major leagues to stay.

-After a couple of years of low ERAs and equally low win totals, Sonny was traded to Boston in 1969. His first two full seasons with the Red Sox represented his peak, as he went 31-18 with a 3.16 ERA and nabbed another All-Star selection in 1971.

-Was the last American League pitcher to hit two home runs in a single game when he took Baltimore's Pat Dobson deep twice on September 2, 1971.

-Put his suitcase to good use in the waning years of his career, moving from Boston to Texas to St. Louis to San Diego to Oakland.

-Spent the 1991 and 1992 seasons coaching for the Padres' Class A Waterloo team. 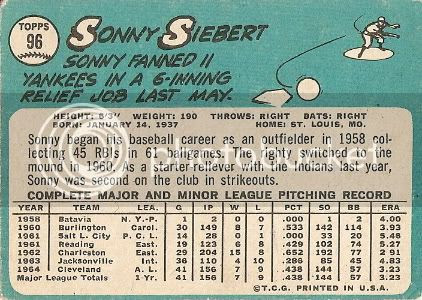 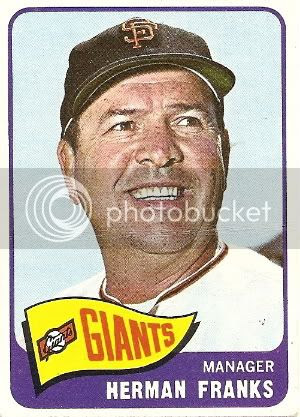 This may be complete nonsense, but Herman Franks looks the way a man named Herman Franks should look. (Reads over it...) Yes. Total and utter nonsense.

-Born in Price, UT, Herman spent a year at the University of Utah before turning pro with the Hollywood Stars. He signed with the Cardinals soon after.

-Served in the military for three and one-half years during World War II.

-Returned to baseball in 1947 as player-manager for Brooklyn's AAA St. Paul team. Resigned in August when the Athletics asked him to join their major league roster.

-Coached for his former manager Leo Durocher's Giants from 1949 through 1955, and was believed to have stolen signs from a center-field perch during New York's late-season comeback in their pennant-winning 1951 season.

-Also served as a scout, minor-league general manager, and coach for the Giants from 1956 through 1964.

-Got his first big league managing gig in San Francisco. Despite a 367-280 record in four seasons (1965-1968), his club settled for four second-place finishes and gradually slid from 95 wins in his first year to 88 in the final campaign. Franks was fired and replaced by Clyde King.

-Returned to the dugout with the Cubs in 1977, but compiled a mediocre 238-241 record in three seasons before resigning near the end of 1979.

-Had a brief run as the interim GM of the Cubs in 1981 to close out his time in the top ranks of baseball management. He lived comfortably for the most part, owing to wise business investments, and died in his home last March at age 95. 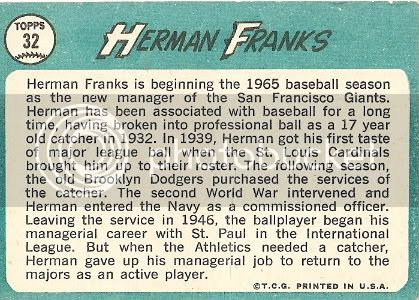 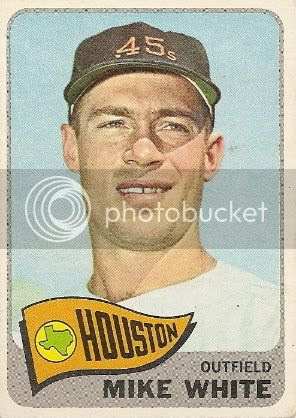 Continuing my trip backwards in time, here's another January trade. Bob Bard, a member of Vintage Card Traders, was good enough to trade me this card and fourteen others that I needed from this set, as well as a few 1986 Topps. In return, I sent some 1995 Topps and 2007 and 2008 Heritage off of his want list. If you would like to help Bob out with any of his collecting needs, you can find his wants and needs here. Thanks again, Bob!

-Mike was born in Detroit, and signed with the Indians as an amateur free agent in 1959.

-After just two years in the Cleveland organization, White was released after suffering a leg injury. He spent a year with the Angels' AA team, then was drafted by the Houston Colt .45s.

-He batted .294 and .324 in his first two seasons in the Houston farm system. In 1963 he even hit for power for the first time in his pro career, clubbing 34 doubles, seven triples, and ten home runs. He earned a September callup late that year.

-His only full season as a major leaguer was 1964, when he collected 280 at bats in 89 games. He started fast, hitting .362 as late as June 9 before cooling down and finishing at .271. He went back to his singles-hitting ways as well, collecting 11 doubles and three triples but no home runs.

-Went 0-for-9 in limited action in the spring of 1965 before being sent back to AAA, never to return. He also toiled in the minors for the Angels (again) and Cubs before walking away at age 30 in 1969.

-Oddly enough, he's the only player in major league history with the seemingly common name of Mike White. 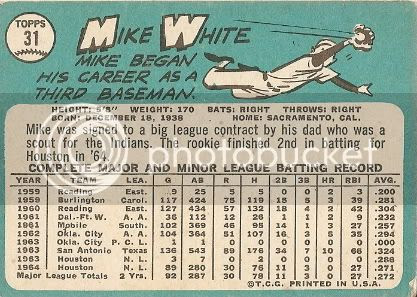 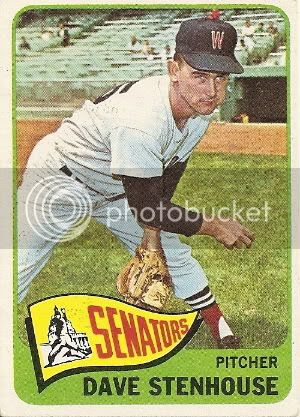 Remember the uproar in certain segments of society when Ken Griffey, Jr. burst onto the scene with his hat turned backwards? Tell me that his style was any worse than that of Dave Stenhouse, who seems to have grabbed his son's replica Senators hat on his way out the door. Yipes.

-A native Rhode Islander, he attended URI before signing with the Cubs in 1955. The only other major leaguer from his alma mater is ex-teammate Angie Dagres.

-Steadily climbed through the Chicago farm system for four years, highlighted by a 16-4, 1.92 mark at class C Lafayette in 1956.

-The Reds drafted Dave from the Cubs in 1958 but allowed him to languish in AAA for three years before trading him to Washington after the 1961 season.

-Wound up back in the minors from 1965-1967, but don't feel too badly for him. He spent much of that time in Hawaii, toiling for Washington's top farm team. He never did make it back to the bigs though, and hung it up at age 33 with a career 4.14 ERA in his 76 MLB games pitched.

-His son Mike Stenhouse was an outfielder for the Expos, Twins, and Red Sox (1982-1986), hitting .190 in 207 games. Another son, Dave Jr., was a catcher in the Blue Jays organization in the 1980s but was derailed by injuries before reaching the majors.

-As his Baseball Reference Bullpen entry helpfully points out, he is not to be confused with pitcher Don Stanhouse. 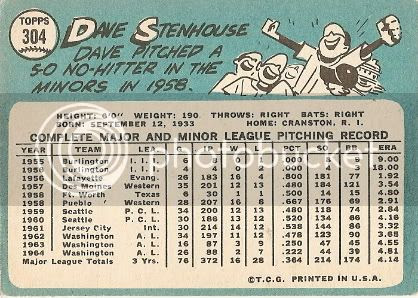