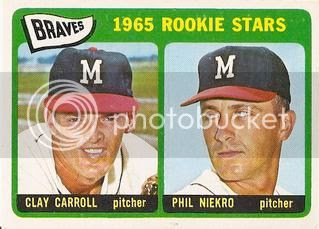 Yikes. A three-month hiatus in the midst of posting the last few cards of the set is bad form on my part. But some of you have hung around for the five years it took to complete this project, and I appreciate your patience and persistence. As a reminder, this card and those that come after (whenever that might be!) were sent along by Max, who is a happenin' sort of dude. Thanks again! It's worth noting that this is Clay Carroll's rookie card, but it's Phil Niekro's second Topps card. He appeared with Phil Roof on a 1964 Rookie Stars card, the first of many cards for ol' Knucksie...

-He impressed as a rookie reliever in September 1964, allowing only 4 runs in 20.1 innings (1.77 ERA). He earned his first career save with four scoreless frames against the Cubs on September 20.

-He hit the only home run of his big league career on May 30, 1969. It was a tiebreaking shot off of Bob Gibson in the top of the tenth inning, sealing a 4-3 Reds win!
-Clay saved some of his best pitching for the postseason, starring for the Reds in 1970, 1972, 1973, and 1975. In a losing effort in the 1970 World Series, he allowed only five hits and two walks (one intentional) in nine scoreless innings of relief against the Orioles. The righty struck out 11 batters while appearing in all but one game of the series, and his 3.2 shutout innings in Game 4 earned him the lone Cincy win in the Fall Classic.

-"The Hawk" was an All-Star in both 1971 and 1972. In the latter season, he had a 2.25 ERA and set a National League record with 37 saves to earn Fireman of the Year honors. No Senior Circuit pitcher surpassed that total until Bruce Sutter blew past him with 45 saves in 1984.

-Sadly, Carroll lost his wife Frances and their 11-year-old son Bret in 1985 when Frances' son (Clay's stepson) Frederick Nowitzke pulled out a gun and opened fire on the family. Frederick also shot Clay in the head, but the ex-pitcher survived. Nowitzke is currently serving a life sentence in Miami-Dade County, FL for first-degree murder.

-He was born in Blaine, OH and signed with the Milwaukee Braves in 1958 after completing high school.

-Phil's big league debut didn't come until 1964, his age-25 season. This was due in part to military service.

-His younger brother Joe was another prominent knuckleball pitcher, and accumulated 221 wins for the Astros and a half-dozen other teams from 1967 through 1988. The Niekros pitched together for the Braves (1973-1974) and Yankees (1985), and the duo holds a major league record for wins by a pair of brothers with 538 in total.

-Among the elder Niekro's accomplishments were three 20-win seasons, a league-leading 1.87 ERA as a swingman in 1967, four years of league-leading complete game totals, and a league-best 262 strikeouts in 1977. He also won five Gold Gloves and was a five-time All-Star.

-Phil no-hit the Padres on August 5, 1973 in a 9-0 laugher. He was able to pitch around three walks and two Atlanta errors.

-Despite spending the majority of his career with subpar Braves teams, Niekro reached the 300-win plateau by virtue of his longevity, remaining active past his 48th birthday! Late in his career he twirled for the Yankees, Indians, and Blue Jays before a final encore in Atlanta in 1987. In his astounding 24-year career, he won 318 games and lost 274, completed 245, and had a 3.35 ERA.

-Phil was inducted into the Baseball Hall of Fame in 1997, and his #35 has been retired by the Braves.

-There are several memorable quotes about Niekro's dancing knuckleball, but my favorite might come from former outfielder Rick Monday, who said, "It actually giggles at you as it goes by." 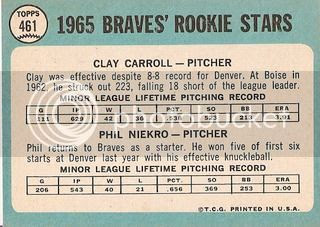