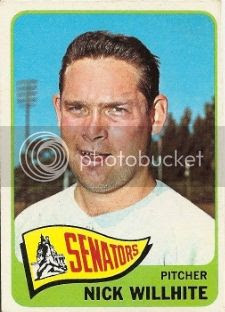 If you read my other blog, you'll know that I got engaged this past Wednesday, so this is a celebratory Friday evening post. If you don't read my other blog, why the heck not? Today we take a peek at Nick Willhite, whose first solo appearance on a Topps card is this one. In the 1964 set, he shared a two-player Rookie Stars card with fellow Dodger Dick Nen. Nick and Dick! Dick and Nick! (Yes, I really am this giddy.)

-Willhite debuted with the Dodgers in a big way, tossing a five-hit, six-strikeout shutout against the Cubs on June 16, 1963. It proved to be his only shutout in 29 career starts.

-The Senators purchased Willhite's contract from the Dodgers in October of 1964, but sold him back to L.A. the following May after he allowed 11 runs (five earned) in five relief appearances.

-Although Nick saw regular-season action for Los Angeles in their World Series-winning seasons of 1963 and 1965 and their pennant-winning season of 1966, he never appeared in a postseason game.

-Willhite later went into coaching, instructing pitchers at Brigham Young University as well as stints in the Brewers and Yankees farm systems.

-By the late 1980s, Nick was thrice-divorced and living on the streets of Salt Lake City. He reached out to former teammate Stan Williams, and was able to obtain treatment for drug and alcohol addictions through the Baseball Assistance Team.

-Willhite became an addictions counselor after his own successful rehabilitation. In December of 2008, he died of cancer at age 67 in his son's home in Alpine, Utah. 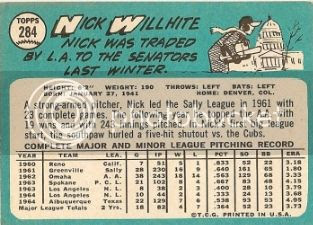