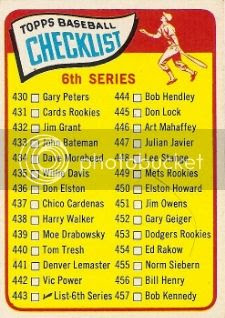 This is the third-to-last card left for me to post...this time I mean it. I'm sorry that it's a checklist, but them's the breaks. Hey, at least it's unmarked! Savor the blank boxes. There's not a lot of star power on the front of the card, as Mudcat Grant, Willie Davis, and Elston Howard are the most notable names. The second half of the checklist for Series 6 is a bit glitzier, as the Braves Rookie Stars card featuring Phil Niekro, the Yogi Berra card, the Cardinals Rookie Stars featuring Steve Carlton, Nellie Fox, and Eddie Mathews all provide Hall of Famer cachet. You also get some very good players in the mix with Dick Allen, the Paul Blair/Davey Johnson Orioles Rookie Stars, Clete Boyer, Wilbur Wood, and Stu Miller appearing on the back. As I'm posting this card well after its acquisition, I can happily report that I have a perfect 77 out of 77 (100%) completion rate for the sixth series. Huzzah! 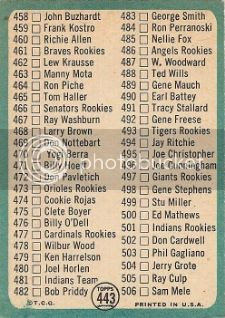