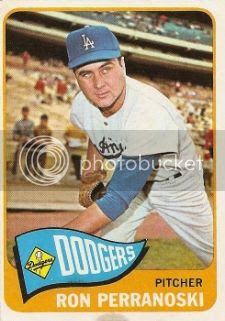 Here's the penultimate card in our long journey, and this time I'm serious. This is a visually striking card; you don't see many crowd shots in 1960's Topps sets. The blurry folks milling around in the stands behind Ron Perranoski make the player pop out in the foreground. I also like Ron's sideways glance, as though the photographer has been putting him through the motions for quite some time. A teammate passes, gives Perranoski a knowing smirk, and Ron shoots him a look that says, "Can you believe this guy? I just want to finish my warmups."

-Ron was born in Paterson, NJ (as Ron Perzanowski) and attended Michigan State University before signing with the Cubs in 1958.

-The Cubs traded him to the Dodgers in April 1960 as part of a three-for-one deal that sent Don Zimmer to Chicago. He debuted with L.A. a year later and was a bullpen fixture from the start, appearing in 53 games with a 7-5 record, six saves, and a 2.65 ERA.

-1963 was Perranoski's standout season, as he posted a 16-3 record in relief with 21 saves and a 1.67 ERA. He paced the National League in winning percentage (.842) and games pitched (69), and finished fourth in MVP balloting. In the Dodgers' World Series sweep over the Yankees, the lefty nailed down a save in Game Two by getting the final two outs in relief of Johnny Podres.

-As you might imagine, the career-long reliever wasn't much of a hitter. In 190 career plate appearances, he had a batting line of .096/.147/.114 with three RBI. However, he did hit a triple on September 4, 1966 off of the Reds' Don Nottebart. I would've liked to have seen him run the bases!

-Ron led the American League in saves in both the 1969 and 1970 seasons, with 31 and 34 respectively. Though the Twins captured the first two Western Division crowns in A.L. history, they ran into the Baltimore juggernaut in the postseason in each year. The league's top fireman allowed a total of eight runs in seven innings as the Orioles swept Minnesota twice.

-The final three years of Ron's career saw him move from the Twins to the Tigers, then back to the Dodgers briefly, before an eight-game stint with the Angels in 1973 signaled the end of the road. In 13 seasons, he was 79-74 with 179 saves and a 2.79 ERA. 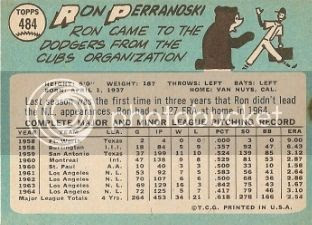