Welcome to The Great 1965 Topps Project! Now that you're here, I should probably explain what the Hell the purpose of this blog is. First, a little background.

I started collecting baseball cards when I was ten, and my first set building experience was 1993 Topps. It's not a particularly pretty-looking set, and not very valuable, but it still holds a special place in my heart. Come to think of it though, I never did get the last eight or so cards I needed to complete it. I guess I should get around to that. But not today.

I was really only a diehard collector for three years, before I became a teenager and lost interest. But in the years that followed, something would light the spark again and I'd pull out my boxes and boxes full of cards and flip through them, reorganize them, even buy a few more packs. But I never did pay any attention to pre-1981 cards...I'd never owned any (save for a 1966 Topps Brooks Robinson), and I probably saw them as something distant and untouchable.

Flash forward to 2007. Through sheer fate and boredom, I stumble upon Ben Henry's Baseball Card Blog. That was all that it took to reignite the spark. I spent a couple weeks stooped over stacks of cardboard in my living room, organizing my collection by year and brand. (I'd previously sorted them alphabetically by player name in some sort of fevered fit of madness.) I began cataloguing them on an electronic database. Most importantly, I began buying cards again.
Like many who have turned away from baseball cards in the past decade, I had grown disillusioned with the extreme measures the card companies took to give their product "value". Thick card stock, gold foil, refractors, relics...these were all annoying buzz words to me. Baseball cards are meant to be enjoyed, not counted as financial assets. I'll be arsed if I'm paying five dollars for a pack of five cards. With this in mind, I turned to eBay. If I was going to spend more money on less cards, I was going to get cards with character and history, dammit.

So I did, focusing mostly on cards of my hometown Orioles. I picked up a 1960 Topps Hoyt Wilhelm, where he stared back at me in a most badass manner. I got a handful of 1971 Topps, with the distinct black borders and mod lettering. I also picked up the 1965 Topps Steve Barber. 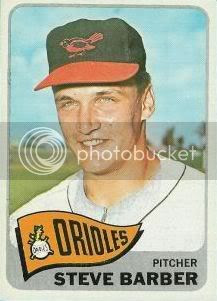 If I was going to start building a 1965 Topps set, Steve is a fitting first card. He is, of course, an Oriole, and a damn good one at that. He was selected for the team's Hall of Fame in 1988, on the strength of his 95 wins in a Baltimore uniform. He also wore #13, which is my favorite number. Barber also had his struggles, taking the loss in a combined no-hitter with reliever Stu Miller on April 30, 1967 against Detroit. Barber walked ten hitters that day, and left in the ninth after walking three hitters and uncorking a wild pitch to plate the tying run. Miller induced a ground ball in relief, but Mark Belanger, who had just entered the game at second base, could not handle shortstop Luis Aparicio's relay toss and the eventual winning run scored.

So again, what's the point of this blog? I guess you could say that I'm testing the power of the Internet and the generosity of baseball card collectors. I love the crisp, classic design of those 1965 Topps cards, with their brightly colored pennants flapping in the imaginary breeze, and I want your help in completing the set entirely through trades. In many cases, this is going to involve me "trading up", a concept mastered by Kyle MacDonald with One Red Paper Clip. I have plenty of duplicate cards available to trade, but most are from the 1980s and 1990s, with a few newer cards sprinkled in (and some 1990s football cards too). I'll be posting lists of the cards available for trade on a regular basis. If you want to make a deal, email me at brotz13 AT gmail.com. I'll be looking for one-for-one trades, my cards for your 1965 Topps. I'm a realist; I know that no one's giving up 40-year-old slabbed gem mint cards for a 1993 Topps Frank Thomas. I'll be happy to take cards with creases and rounded corners, but I probably won't be interested in any mutilated cards (i.e. Jim Bunning with a mustache drawn on, or a card with half the surface torn off). I'll post the trade results on this blog as they come in, and say a few words about the cards that I'm receiving and sending.

Okay, now that we've broken the ice, I promise that future posts won't be nearly this long. So make me an offer!
Posted by Kevin at 10:43 AM