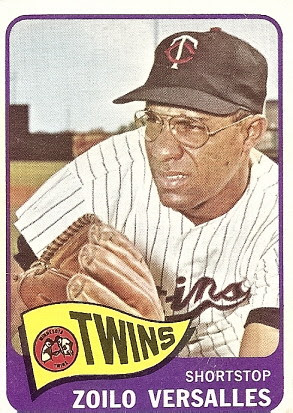 The third and final card from Max features the man who may be the most unlikely MVP ever, shortstop Zoilo Versalles. He's also the only player in this set with a first named beginning with "Z". (Don Zimmer and Jerry Zimmerman have the only two Z surnames.) The Cuban-born infielder was first called up to the big leagues by the original Senators as a nineteen-year-old. He would become a fixture in the team's lineup after they moved to Minnesota, reaching double digits in home runs in four consecutive years (no small feat for a shortstop in the 1960s). Zoilo would make his first of two All-Star teams in 1963, and reached base in all three plate appearances. He also picked up a Gold Glove that year.
1965 would be a career year for Versalles. In addition to picking up a second All-Star nod and Gold Glove, he would be named the American League's Most Valuable Player. He led the circuit in runs scored (126), doubles (45), triples (12), extra-base hits (76), and total bases (308). He was also third in stolen bases (27). Of course he also hit just .273 with 77 RBI, making his selection for the award somewhat questionable by modern standards. By comparison, teammate and runner-up Tony Oliva hit .321 with 16 home runs and 98 RBI. Of course, both players were instrumental to a great year for the Twins, who lost the World Series to the Dodgers in a seven-game classic made notable by two Sandy Koufax shutouts in a three-game span. Zoilo played well, leading the team in every major offensive category in the series.

Most of the denigration of Zoilo's MVP award has come in hindsight and is based on his stunning and immediate decline from age 26 onward. After all, his performance in 1965 was impressive, particularly in an era more geared towards pitching. In 1966, his average fell by 24 points, his extra-base-hits plummeted by more than half, and he even stumbled on the basepaths (10-for-22 stealing). The following year was unprecedented in its awfulness: his OPS (combined on-base and slugging percentages) was .530. By comparison, Barry Bonds' on-base average ALONE was .529 in 2003. After three more miserable seasons in which he bounced from Los Angeles to Cleveland (by way of San Diego) to Washington to Atlanta (by way of a Mexican League team), his twelve-year career was history.

Fun fact: Zoilo's 1961 Topps rookie card features one of the most amusing errors in baseball card lore. He's identified as "Zorro" Versalles. Apparently his nickname was Zorro, but Beckett classifies the card as an uncorrected error. Either way, I like it. 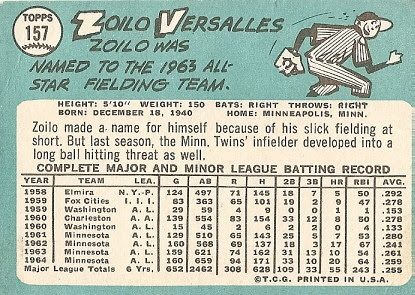