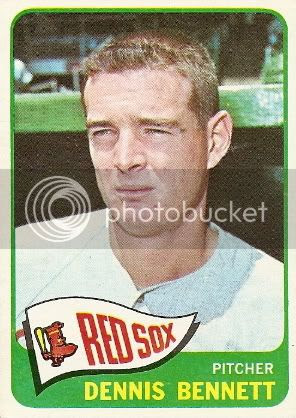 I do believe that this may be the squintiest card in the entire 1965 Topps set. Maybe if Dennis had kept his cap on, the sun wouldn't be in his eyes so severely.

-Oakland-born Bennett played one year at Shasta County Junior College before signing with the Phillies in 1958.

-A hard-throwing lefty with a full complement of pitches, Dennis debuted with the Phils in 1962, going 9-9 with a 3.81 ERA and finishing second on the club with 149 strikeouts.

-Highlights of his rookie season included a four-hit, 11-strikeout shutout of the Dodgers for his first win and a streak of three consecutive complete-game wins in September.

-He was fortunate to survive a serious car accident the following winter in Puerto Rico, where he had been pitching. His winter team's owner suffered a fatal heart attack while driving, and Bennett went through the windshield. He suffered a shattered ankle, broken pelvis, and f

acial lacerations, as well as a cracked left shoulder blade that was undiagnosed for three years afterward.

-Incredibly, he was back on the mound by June of 1963 and pitched well, going 9-5 with a 2.64 ERA and being selected as Philadelphia's Most Courageous Athlete.

-On June 12, 1964, Dennis took the loss as the Mets knocked him out of the box early; however, it was a big day for his family. Brother Dave pitched the ninth inning for the Phils in what would be his only major league appearance. Dave's son (and Dennis' nephew) Erik Bennett would pitch for the Angels and Twins in 1995-1996.

-Like most of his teammates, Dennis started strong in 1964 (9-5 at midseason) before faltering down the stretch. His undiagnosed shoulder fracture developed a calcium deposit that caused him increasing pain, and he finished the season with a 12-14 record and 3.68 ERA.

-Traded to Boston before the 1965 season, he struggled with arm and shoulder pain and clashed with manager Dick Williams in a two-and-a-half season stint with the Red Sox (12-13, 3.96 ERA).

-Dennis finished his big league career with the Mets and Angels, appearing in his last MLB game in 1968 but pushing on in the minors through 1973. In seven seasons in the majors he was 43-47 with a 3.69 ERA and six saves.

-He currently resides in Klamath Falls, OR, where he opened the City Club bar in 1969. He's been married to wife Terry for nearly four decades and they have six sons and three daughters. For an informative article that includes several quotes from Dennis, click here. 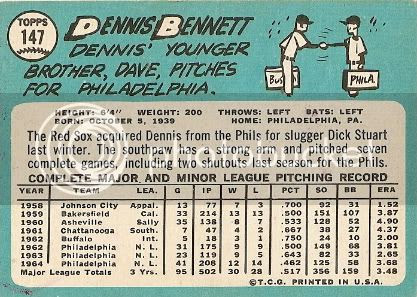