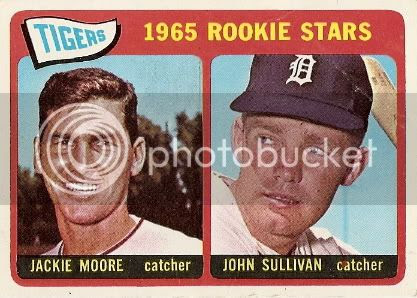 Now that you've probably forgotten where I started, it's time to conclude my haul from the trade with Steve. Thanks once again, Steve! Today we have two rookie catchers who had brief and lackluster major league careers but went on to bigger things as coaches and managers. How 'bout that?

-Originally from Jay, FL, Jackie was signed by the Tigers as a teenager in 1957.

-He toiled in the minor leagues for 11 seasons, hitting .250 overall.

-After Boston released him in early 1968, he embarked on a long career as a coach and manager, starting with two seasons at the helm of Jamestown, the Red Sox' New York-Penn League affiliate.

-Was the skipper of Houston's Round Rock Express farm club for the first eight seasons of their existence (2000-2007). The team began as a AA affiliate and later moved to the AAA Pacific Coast League.

-Spent 2008 serving as manager Cecil Cooper's bench coach with the Astros. Jackie was Moore's first manager in pro baseball on the 1968 Jamestown team.

-Is currently in his fifth stint with the Rangers, now employed as their bench coach.

-Based out of Somerville, NJ, John signed with the Tigers after graduating from high school in 1959.

-Hit .322 in his first pro season (class D Erie) but could not maintain his momentum in subsequent seasons.

-Was first called up to Detroit in 1963, but was hitless in five MLB games spanning that season and the next.

-Started for the Tigers on Opening Day, 1965 and bashed a two-run homer against Wes Stock for his first big-league hit. John drove in a career-best three runs in the 6-2 win over the A's.

-Played sparingly for the rest of the season but hit a personal-best .267 with a .340 on-base percentage in 34 games.

-Finished his big league career with a dozen games in Philadelphia in 1968; he would continue playing in the minors through 1971.

-Managed in the Royals farm system from 1973-1978, winning four league championships in six years. The last of those championship clubs was the 1978 Omaha Royals, who topped a weak American Association Western division at 66-69 before toppling the East champion Indianapolis Indians in the postseason!

-Coached in the majors for fifteen years with the Royals, Braves, and Blue Jays (1979-1993). Served as bullpen coach for three Toronto managers and held the position during their World Series wins in 1992-1993. 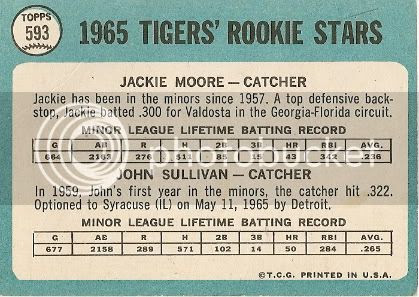