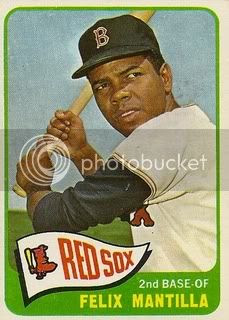 Hmm, not much to say about this photo of "El Gato". It does call attention to the thin red piping on the Red Sox' jersey sleeves, which is a nice understated touch.

-Felix is a native of Isabella, Puerto Rico. He signed with the Braves as an 18-year-old in 1952.

-He appeared in four games in the 1957 World Series and went 0-for-10 with a walk. Still, the Braves bested the Yankees in seven games.

-Mantilla hit only seven home runs in 1958, but two of them came off of a young Sandy Koufax.

-On May 26, 1959, he "broke up" Harvey Haddix's perfect game in the 13th inning, leading off with a ground ball that third baseman Don Hoak threw away. He scored the winning run three batters later on Joe Adcock's home run, which was subsequently ruled a double when fellow baserunner Hank Aaron misjudged the situation and allowed Adcock to pass him on the bases.

-After six and a half underwhelming seasons as a backup in Milwaukee, he was taken by the Mets in the expansion draft. In 1962, he got the majority of the new club's starts at third base and hit .275 (trailing only Richie Ashburn for the team lead) with 11 home runs and 59 RBI. Only Frank Thomas drove in more runs for New York.

-Felix was traded to Boston in 1963, and grew to enjoy playing in Fenway Park. In 1964 he hit a career-high 30 home runs, batted .289, and slugged .553. (His career total entering the season was just 35 HR). He paced the Red Sox with a 144 OPS+ while playing six positions, primarily second base and left field.

-He received his only All-Star selection in 1964, when his home run total dropped to 18 but he achieved personal bests of 92 RBI (tops on the BoSox) and a .374 on-base percentage.

-Mantilla was dealt to the Astros for the 1966 season, but struggled in a part-time role, hitting .219 with 6 home runs in 151 at-bats. He was released that November and signed with the Cubs, who released him before he ever took the field for them. 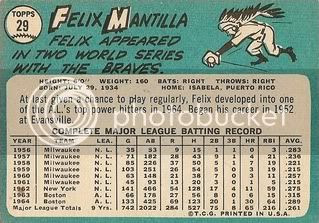