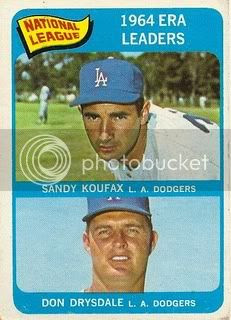 I'm back from an end-of-2011 break with three more cards for the collection, which is nearly complete! 589 down, 9 to go; I can hardly believe it! Though I wasn't able to make it to December's incarnation of the Philly Card Show, Ed once again served as my eyes and ears and found a few of my dwindling needs. He knows how to find bargains, and this card featuring the Dodgers' pair of Hall of Fame hurlers is no exception.

It's certainly no surprise that Don Drysdale and Sandy Koufax finished 1-2 in the National League in earned run average in 1964, especially considering that they made their home starts at pitcher-friendly Dodger Stadium. The bigger shock is that Los Angeles finished in sixth place with 80 wins, but that can be chalked up to the club's humdrum offense. Koufax was in the midst of his incredible run of five straight ERA titles, clocking in with a career-low 1.74 (he then topped it with a 1.73 mark in his farewell 1966 season). However, arm woes brought an abrupt end to Sandy's standout year in mid-August; he finished 1964 with 223 innings pitched, nearly 100 less than teammate Drysdale. Don checked in with a 2.18 ERA in a league-leading 321.1 innings of work. He ran into some tough luck, accumulating an 18-16 record despite his mound mastery. The big righthander never did capture an ERA title, though he did grab three strikeout crowns earlier in his career and topped the senior circuit with 25 wins in 1962.

Upon flipping the card over, we see the same extended leaderboard as on the other league leader cards in this set. We've got the Phillies' Chris Short (2.20 ERA), Juan Marichal of the Giants (2.48), and another Phil in Jim Bunning (2.63) rounding out the top five. Because there were only ten teams in the National League, and most were working with four-man rotations, it's a pretty comprehensive list. Aging star Warren Spahn, bringing up the rear at 5.28, surely wishes it was less comprehensive! Topps also offered an interesting addendum, a list of the 13 best ERAs for pitchers who topped 75 innings but fell short of the 162 needed to qualify. As you can see, Pirates reliever Al McBean (1.90 ERA in 89.2 IP) is the only one who even comes close to Koufax's miniscule mark. 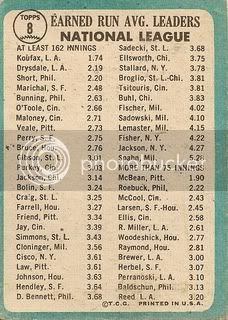