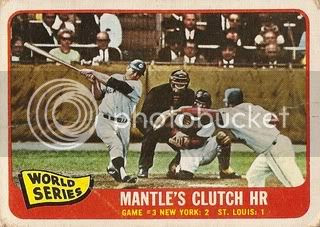 That's 590 down and 8 to go! I might not get my hands on the Mick's regular base card any time soon, but a gen-u-ine World Series action photo beats some humpty-dumpty posed shot any day, if you ask me. Here's another card that I've bought off of Ed for $10.

To set the stage: it's Saturday, October 10, 1964. 67,101 fans have packed into Yankee Stadium to see if the Yankees can take a 2-1 lead over the Cardinals in the World Series. 18-game winner Jim Bouton starts for the Yanks, opposed by veteran and fellow 18-game winner Curt Simmons of St. Louis. Simmons, making his first postseason start in his 17th big league season, runs into trouble in the second inning. Elston Howard singles, Joe Pepitone walks, and Clete Boyer plates the game's first run with a double. New York strands two runners in scoring position as Bouton flies out, and Simmons bears down and shuts them out for the next six innings.

Bouton is also on his game, allowing only six Cardinal hits in nine innings. He gives up a single unearned run in the fifth inning to tie the game, though. Tim McCarver leads off the frame with a single but moves up to second base as Mickey Mantle misplays it in right field. Dal Maxvill advances the runner to third with a groundout, and Simmons evens things up with a two-out single. This sets the stage for a tense ninth inning.

Still trying for the complete game, Bouton is betrayed by his defense once more in the top of the ninth. McCarver leads off again and reaches first base as shortstop Phil Linz boots a ground ball. Mike Shannon, who hit into a fielder's choice to leave the bases loaded in the sixth, bunts McCarver to second. Pinch hitter Carl Warwick walks, and Bob Skinner bats for Simmons and moves the lead runner to third with a flyout to deep center field. Curt Flood lines out, leaving St. Louis hoping for extra innings. But it's not to be. Reliever Barney Schultz surrenders the game-winning home run to Mantle, the first batter in the home half of the ninth. It is the 16th of an eventual 18 home runs hit by Mickey in World Series play, and the last of those to be hit in New York. It also proves to be the last home win for the Yanks in the Fall Classic until the first game of the 1977 Series. 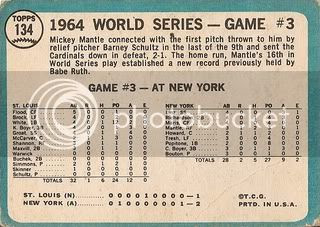