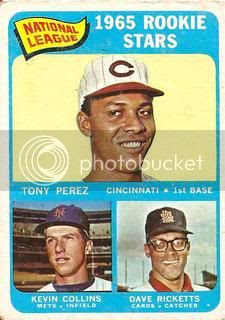 As you can see from the status of my set counter on the left side of the blog, I have completed this set, in a bit under five years! That means I've got some catching up to do. As has been the case on a few occasions, Ed tipped me off to a dealer selling this Tony Perez (and company) rookie card for a song...or ten songs, if you will. It's a very worthwhile investment, not just for Big Doggie's mischievous grin, but for the impenetrable thickness of Dave Ricketts' Coke-bottle glasses. Anyhow, let's push forward with this trio of mismatched National League rookies. After that, it's on with the Final Four of The Great 1965 Topps Project...huzzah!

-Tony was born in Ciego De Avila, Cuba. The Reds signed him prior to his 18th birthday in 1960.

-He debuted in late 1964, but did not become a full-time starter until 1967. That year Perez made the first of 7 All-Star Teams, hitting .290 with a team-best 26 home runs and 102 RBI as the regular third baseman. He hit the game-winning home run for the National League in the All-Star Game, a fifteenth-inning shot off of Catfish Hunter that helped wrap up the longest Midsummer Classic game ever.

-Though Perez's Cincinnati team of the 1970s was known as "The Big Red Machine", they had to wait until 1975 to get their first taste of championship glory. The slugger was instrumental in their thrilling seven-game World Series win over Boston, delivering a pair of homers and four RBI in a Game Five victory and his sixth-inning two-round homer keyed the Reds' Game Seven comeback from a three-run deficit.

-He had remarkable longevity, playing in the majors until age 44. He spent the last decade of his career with the Expos, Red Sox, and Phillies, and finally returned to the Reds in the mid-1980s as a part-timer.

-After a long wait, Perez was voted into the Baseball Hall of Fame in 2000, joining former teammates such as Joe Morgan and Johnny Bench. That same year, the Reds retired his number 24 jersey.

-He was hired to manage the Reds in 1993, but was fired just 44 games into the season with the team struggling at 20-24. Eight years later, he was on the other side of the coin, replacing John Boles as the Marlins' interim manager when that club got off to a 22-26 start. Under Perez, the Fish finished in fourth place in the N.L. East at 54-60 (76-86 overall).

-His son Eduardo played for several big league teams from 1993 through 2006, manning all four corner infield and outfield positions and batting .247 with 79 home runs. Another son, Victor, briefly played minor league ball in the Reds organization.

-Tony currently serves as special assistant to the general manager of the Marlins.

-After shoulder surgery spoiled his selection to the Opening Day roster, New York called up the 18-year-old in September 1965, making him the fourth-youngest player in the league that season. His first hit was a single off of the Pirates' Bob Friend on September 22.

-He made his first big-league home run count, delivering a tie-breaking three-run shot in the ninth inning of a 4-1 win in Houston on August 6, 1968.

-In June 1969, Kevin was one of four players sent to the Expos in exchange for Donn Clendenon. On July 17, he hit the first pinch homer in Montreal team history, a three-run bomb off of future Hall of Famer Jim Bunning.

-Collins finished his major league career with two seasons of pinch-hit duty in Detroit, batting a career-high .268 in 1971 (albeit in 41 at-bats).

-He spent another three years playing in the minors for the Tigers and Indians before retiring from baseball at age 27.

-Kevin is now retired and living in Sand Point, MI with his wife Linda. He has two children and three grandchildren, according to an article by Jon Springer.

-Dave was born in Pottstown, PA, which was also the birthplace of Bobby Shantz and Buck Weaver.
-After attending Duquesne University, where he also played basketball, he signed with the Cardinals in 1957.

-His older brother Dick played in the NBA for three seasons and pitched for the Cardinals in 1959, going 1-6 with a 5.82 ERA.

-After another brief look at the majors in 1965, Dave finally settled in as Tim McCarver's backup in 1967. Playing in a career-high 52 games, he batted .273 with his only career home run and 14 RBI.

-He appeared in back-to-back World Series for the Cards, going 0-for-3 in the team's 1967 triumph over Boston and stroking a pinch single in his only at-bat in the 1968 loss to the Tigers.

-Ricketts was traded to the Pirates prior to the 1970 season, his final year in the big leagues.

-Dave coached for the Pirates and Cardinals for two decades. He died of renal cancer on July 13, 2008, a day after his 73rd birthday. 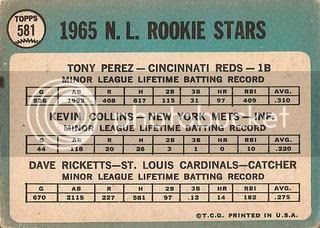