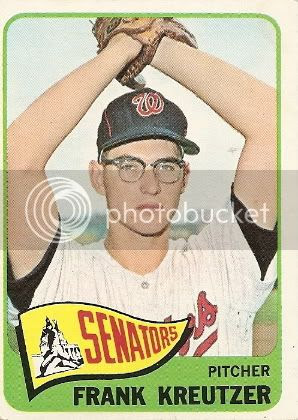 Here's the nattily bespectacled Frank Kreutzer, who the Senators scouted while he was working at the local public library. Full disclosure: This cheap joke is not to be interpreted as a dig at librarians. Why, my own girlfriend is a librarian.
Fun facts about Frank Kreutzer:

-Frank called Buffalo, NY home. He attended Villanova University before signing with the Red Sox in 1961.
-The White Sox drafted him out of Boston's organization after his first pro season, and he made his major league debut in September 1962.

-Won his first career start on September 28, 1963, allowing one run on three hits in five innings. Chicago topped the Senators, 7-2.
-Earned his only career save on June 4, 1964, when he was perfect against the Indians for the final four innings of a 5-1 triumph.

-Split the 1964 season between the Pale Hose and the Senators. It was one of only two full seasons in the bigs for Frank, and his best overall. He was 5-7 with a 4.10 ERA as a swingman.
-Had a memorable day on July 2, 1965. Three-hit the Tigers for his only career shutout...and hit his only career home run - a two-run shot off of opposing starter Hank Aguirre!

-His eight wins rank fifth all-time among Villanova alumni. Turn-of-the-20th-Century righthander Red Donahue leads the way with 164...but you probably knew that already.
-Kreutzer allowed as many home runs (one) to pitcher Eddie Watt (three career HR) as he did to Hall of Famer Mickey Mantle (536 career HR). Baseball's an odd game. 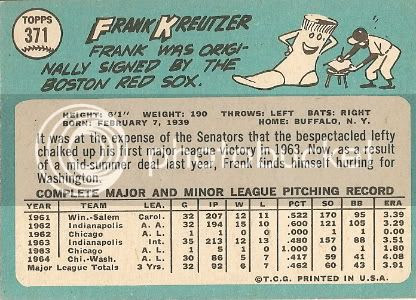