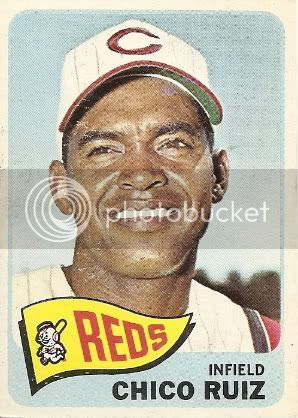 It's pretty rare to get an extreme closeup in this set in which the player is wearing a hat. I'm glad to see better detail on Chico's Reds hat, as we can see the red pinstripes that match those on his jersey. I'm also grateful that the camera angle isn't low enough to allow us to see up his nose.

-Born in Santo Domingo, Cuba, Ruiz signed with the Reds in 1958.

-He had a slow climb through the minors that included three and a half seasons at AAA before finally debuting with Cincinnati at age 25 in 1964. That year, he received a career-high 311 at-bats; he wouldn't top 250 at-bats in any other season.

-During his rookie season, he played a small yet crucial role in the famous 1964 pennant race. It was Chico's steal of home (with Frank Robinson at bat, no less) that provided the only run in a 1-0 win over the Phillies on September 21. It was the first of ten straight losses for the Phils, which cemented their epic collapse down the stretch.

-Hit his only two career home runs in his rookie year. The first was a two-run inside-the-park shot against the Astros on April 21, 1964.

-Was a versatile player, logging time at every defensive position except center field and pitcher during his career.

-Chico was the only player in major league history to pinch-hit for both Pete Rose and Johnny Bench.

-After six seasons in Cincinnati, he was traded with Alex Johnson to the Angels for three players, including Pedro Borbon, Sr.

-Chico made headlines with the Halos for the wrong reason, when he allegedly charged into the clubhouse in 1971 brandishing a gun and professing his hate for Johnson. Supposedly he threatened to kill the unpopular outfielder.

-Ruiz played his final game for the Angels in 1971, finishing his career with a .240 average, two home runs, and 69 RBI in parts of eight seasons.

-Chico was killed in a car accident at age 33. Early on the morning of February 9, 1972 (38 years ago today...eerie coincidence), he struck a sign pole in San Diego. 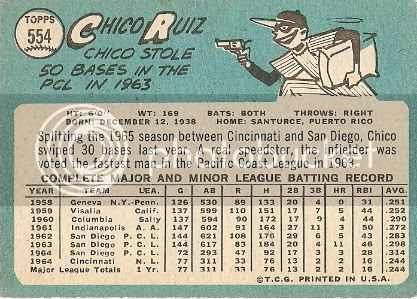