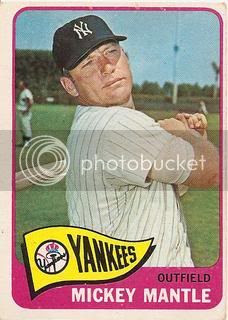 Well, what have we here? The Final Four in my nearly five-year set collecting journey all came from Max of the Starting Nine blog. That shouldn't come as a surprise, since Max has been one of the most prolific contributors to my cause. In return for this beautiful card of the Mick (as well as three 1965 Rookie Stars cards to be revealed later), I sent off some assorted Mets, football Giants, and Saints ephemera and a couple of Rookie Trophy cards: Willie McCovey's 1960 Topps #316 and Billy Williams' 1962 Topps #288. There will be more goodies headed Max's way as soon as I get my lollygagging rear in gear and finish organizing my collection. Thanks a bunch as always!

-Mantle was born in Spavinaw, OK. His father, Elvin Charles "Mutt" Mantle, was a lead miner whose own baseball dreams were impressed upon the strong young boy. He was named after Hall of Fame catcher Mickey Cochrane, the elder Mantle's favorite player.

-The Mick started the first two games of the 1951 World Series as a rookie, but suffered a catastrophic knee injury as he pulled up to avoid colliding with Joe DiMaggio in the outfield and his cleats caught on a drainage cover. Despite a probable torn ACL in his right knee, Mantle took over as the starting center fielder in 1952, playing 142 regular-season games and batting .311/.394/.530 with 37 doubles (ultimately his career high), 23 homers, and 87 RBI. He led the American league with a .924 OPS, garnered the first of 16 All-Star selections, and OPS'd 1.061 in a World Series triumph over the Dodgers. He hit the first couple postseason home runs of his career, and later retired with a Series-record 18 round-trippers.

-In 1956, Mickey reached the stratusphere, capturing the American League Triple Crown (.353 AVG, 52 HR, 130 RBI) and the first of three AL Most Valuable Player awards. He achieved career highs in RBI, runs scored (132), slugging percentage (.705), and total bases (376). His adjusted OPS+ of 210 led the league, which should almost go without saying.

-Mantle successfully defended his MVP plaque in 1957, although his counting stats were held down by virtue of an increase in walks (from 112 to 146) and a decrease in overall plate appearances (from 653 to 623). The powerful and swift center fielder still topped the Yanks with 34 homers and 94 RBI and had high-water marks in batting average (.365), on-base percentage (.512!), and OPS+ (221!). Ted Williams (.388/.526/.711, 38 HR, 87 RBI) had superior numbers, but his poor defensive reputation combined with a prickly personality and the also-ran status of his Red Sox conspired to leave the Splendid Splinter a close runner-up for the league's top individual prize.

-Mickey himself had three second-place MVP finishes, the most famous coming in 1961. Mantle and teammate Roger Maris spent the year racing to catch Babe Ruth's single-season record of 60 home runs, but the affable and favored Mick fell short and finished with a still-impressive stat line of .317/.448/.687, 54 HR, 128 RBI. The quiet, workmanlike Maris hit his 61st in the final game of the year, much to the consternation of many star-chasing fans of the game, and beat out his more famous teammate for MVP honors for a second straight year.

-Alcoholism and injuries caught up to Mantle in his thirties, as he missed an average of 41 games per season from 1962 through 1968. He was still a productive player when able to take the field, as evidenced by a .412 OBP and 165 OPS+ in those waning years.

-The Yankees retired Mantle's #7 in 1969 and presented him with a plaque, which now hangs in Monument Park inside Yankee Stadium. He was a first-ballot Hall of Famer in 1974, and was inducted alongside good friend/teammate/partner in crime Whitey Ford.

-Mantle had an uneasy personal and professional life after baseball, which included a divorce from his long-suffering wife Merlyn, financial troubles stemming from several poor business deals, a rocky relationship with his four sons (all of whom developed substance abuse problems as well), and even a temporary ban from baseball. Commissioner Bowie Kuhn punished both Mantle and his contemporary Willie Mays for accepting community relations jobs with resort/casinos in 1983, but their bans were lifted two years later by Kuhn's successor Peter Ueberroth. Mickey finally quit drinking in 1994 at the urging of his family, friends, and doctor, but the damage had already been done. While receiving a liver transplant in June 1995, he learned that he had inoperable liver cancer. It soon spread to the rest of his body, and he died at age 63 on August 13, 1995. 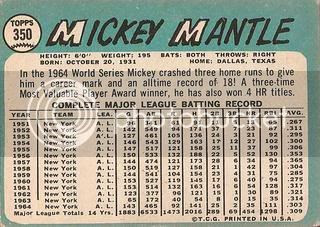