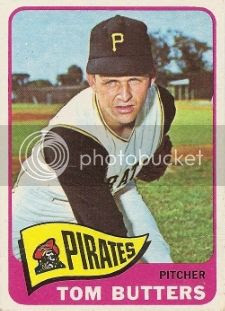 When I hear the name "Butters", I think of the earnestly naive character from South Park. Given the grimace on Tom Butters' face as he completes his delivery in this photo, I could easily hear him muttering, "Aww hamburgers".

-Tom was born in Delaware, OH, and grew up following Lou Boudreau's successful Indians teams. He signed with the Pirates as a 17-year-old in 1957, and attended Ohio Wesleyan University for one semester each year, ultimately graduating with a degree in religion and physical education.

-He didn't reach the majors until 1962, in large part due to control issues; he walked at least 5.3 batters per nine innings in each of his first four years in pro ball.

-Butters made his big league debut on September 8, 1962 with two innings of scoreless relief against the Dodgers. He struck out three batters: opposing pitcher Pete Richert, Ron Fairly, and soon-to-be batting champ Tommy Davis. In four relief appearances that month, the rookie allowed a single run in six innings.

-He spent much of the 1964 season as a low-ranking member of the Pirate bullpen, starting four games and relieving in 24 others. He split the decisions in those four starts, going 2-2 with a solid 2.38 ERA for the year. He still wasn't very precise, striking out 58 and walking 37 in just 64.1 innings.

-While driving through Fayetteville, NC en route to spring training in 1965, Butters' car was struck from the rear by another driver. The collision caused Tom to suffer from severe whiplash, and he dealt with lingering headaches and nausea. He tried to pitch through his maladies, but gave up seven earned runs in nine innings out of the Pittsburgh 'pen and was released in midseason.

-Tom saw the writing on the wall and retired, finishing with a 2-3 record and a 3.10 ERA in parts of four major league seasons.

-He briefly took an admissions job at his alma mater before hiring on at Duke University in the development office. When the head baseball coach died suddenly, Butters was selected for that post at the suggestion of his ex-teammate (and Duke alumnus) Dick Groat. The Blue Devils had an overall record of 43-53-1 in three seasons under the former big leaguer, but were hamstrung by a lack of athletic scholarships.

-Tom's superlative fundraising efforts earned him several promotions, leading to his appointment as athletic director in 1977. His most notable achievement in that role was the 1980 hiring of Mike Krzyzewski as men's basketball coach; 33 years and four national championships later, "Coach K" is still at the school.

-Butters retired from Duke in 1998, and was elected into the university's Sports Hall of Fame a year later. The Schwartz-Butters Athletic Center, the capstone project of Tom's tenure, was dedicated in 2000.

-He still spends most of his time in Durham, NC with Lynn, his wife of more than 50 years. The couple have two children.

(The source for much of this blog post is Rory Costello's SABR biography of Tom Butters, which is rich in detail even though it tends to verge on Duke University boosterism.) 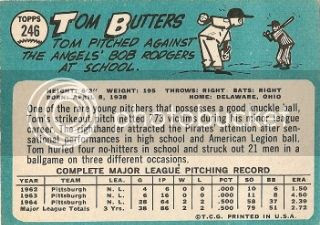