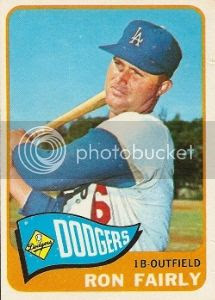 Is Ron Fairly the only player in the 1965 Topps set whose surname is an adverb? I can't think of any others, but my brain is a bit fried from juggling Easter week celebrations with moving my girlfriend into my house. The ball is in your court, dear readers.

-A native of Macon, GA, Ron moved to southern California at a young age and starred at USC before signing with the Dodgers for a $75,000 bonus in 1958.

-His father Carl played minor league ball for 11 seasons, roaming the infield. His best year came at Class B Macon in 1938, the year Ron was born; he batted .302 for the Peaches.

-A crowded Dodgers outfield and a stint in the Army Reserves slowed Ron's meteoric rise, but he batted .322/.434/.522 as a part-time player in 1961 and found a new home at first base. The following year, he led the club with a .379 on-base percentage.

-Fairly played in four World Series with the Dodgers, winning championships in 1959, 1963, and 1965 and bowing to the Orioles in 1966. In 1965, he started all seven games against the Twins and batted .379 with a .690 slugging percentage. He hit safely in 11 of 29 at-bats, homered twice, and drove in six runs. Perhaps most impressively, he struck out only once.

-A late-20's decline that Fairly attributes to a change in Dodger Stadium groundskeeping (post-Koufax, the team grew the infield grass longer, which slowed down hard ground balls) spurred Los Angeles to trade him to the Expos in June 1969. L. A. reacquired Maury Wills and Manny Mota in the deal.

-Though Ron wasn't happy playing for an expansion team far from home, his performance did rebound in Montreal. His OPS+ was 115 or greater in each of his half-dozen seasons as an Expo, and he was an All-Star for the first time in 1973. That year he had a .298 average and career highs of 17 home runs and a .422 on-base percentage.

-After two seasons split between St. Louis and Oakland, Fairly became the only player ever to appear in All-Star Games as a member of both Canadian teams. He batted .279 and reached base at a .364 clip for the Blue Jays in their inaugural 1977 season, leading the team with 19 home runs.

-Ron spent nearly 30 years broadcasting games for the Angels, Giants, and Mariners before retiring in 2006. 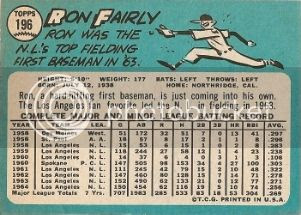