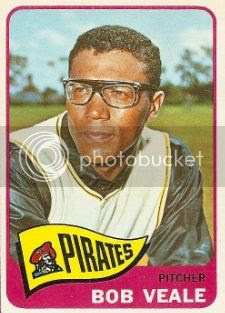 Man, I can't believe that I skipped over this card the first time around! Bob Veale's thick specs, even more so than his status as a premier strikeout artist, make his card one of the MVPs of the 1965 Topps set.

-Bob was born in Birmingham, AL and attended Benedictine College in Kansas before signing with the Pirates in 1958.

-Veale was 26 years old when he made the Pirates' Opening Day roster for the first time in 1962. In his second career start (April 22), he earned a complete-game, 4-3 victory against the Mets for his first win.

-1964 was Bob's first full season in the Pittsburgh rotation, and he led the team in practically every pitching category. He was 18-12 with a 2.74 ERA (128 ERA+) and 14 complete games. He also led the National League with 250 strikeouts (edging Bob Gibson on the season's final day), 0.3 HR/9 innings (only 8 in 279.2 innings pitched), and 124 walks allowed. The high strikeout and walk totals and the low home run yield were trends throughout the 6'6" southpaw's career.

-Veale made the first of back-to-back All-Star teams in 1965, when he posted a 17-12 record and a 2.84 ERA. He also established a career high with 276 strikeouts, a total that was dwarfed by Sandy Koufax's otherworldly tally of 382.

-The Bucs moved Veale to the bullpen in 1971. The results were gruesome, as his 6-0 record masked a 6.99 ERA. He allowed 36 earned runs in 46.1 innings, and allowed three of the five batters he faced in that year's World Series to reach base.

-He spent the last two seasons and change of his career as a reliever in Boston, retiring after the Red Sox released him in October 1974. In parts of 13 big league seasons, he was 120-95 with a 3.07 ERA.

-Bob is still the Pirates' record-holder with 7.96 strikeouts per 9 innings during his tenure with the club. He is 38th on the all-time MLB list, though several pitchers ahead of him are still active and may drop as they decline.

-Veale spent about a decade after his playing career as a pitching instructor. Among other teams, he worked in the Braves organization.

-He was selected to the Alabama Sports Hall of Fame in 2006 and still lives in Birmingham. 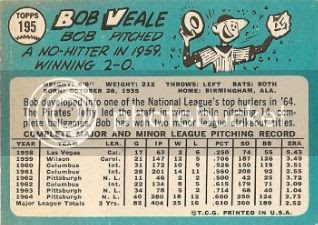