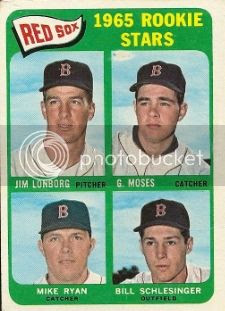 Right. So I had a grand, heartfelt farewell address written for this, the last card to be posted to The Great 1965 Topps Project. Then I actually doubled back to update the Checklist page, and...there are 12 cards that I have in my possession that I've never scanned, written up, and posted to the blog. You'll have me to kick around for at least another month. Whoops! Still, this IS the last pesky high-series rookie card, courtesy of Max. It features one big league mainstay, two role players, and a cup-of-coffee guy. We've done worse with Rookie Stars player selection. So here goes.

-Jim was born in Santa Maria, CA, and signed with the Red Sox in 1963 after earning a biology degree at Stanford University.

-His high school teammate and good friend Mel Queen went on to pitch for the Reds and Angels, and also married Lonborg's sister.

-Lonborg came of age in Boston's 1967 "Impossible Dream" season, going 22-9 with a 3.16 ERA to tie former teammate Earl Wilson for the American League lead in wins. He also led the loop with 246 strikeouts en route to his lone All-Star berth, a sixth-place finish in MVP voting, and a near-unanimous selection as AL Cy Young Award winner.

-He pitched to a 2.63 ERA in three starts in the 1967 World Series, shutting out the Cardinals in Game Two and outlasting Steve Carlton in Game Five before running out of gas in the decisive Game Seven.

-An offseason skiing accident in the winter of 1967-1968 caused severe ligament damage in Jim's left knee. He tried to rush back from surgery and wound up damaging his rotator cuff while compensating for the knee; he would never be as effective as he had been before these injuries.

-After hanging up his spikes, Jim matriculated from Tufts University Dental School. He has had his own dental practice in Hanover, MA since the mid-1980s.

-According to comedy writer and former baseball announcer Ken Levine, the photo of "Sam Malone" that hung above the bar on the popular sitcom "Cheers" was actually a photo of Lonborg. The character (played by Ted Danson) was a former Red Sox pitcher.

-Haverhill, MA native Mike Ryan grew up as a Red Sox fan, then signed with the team as a teenager in 1960.

-After four years as a light-hitting, defensively-adept catcher in the Boston farm system, Mike got a one-game cup of coffee on October 3, 1964, going 1-for-3 with a two-run single and an intentional walk in a 7-0 Sox victory.

-Every dog has his day: Mike hit home runs off of Hall of Famers Juan Marichal and Tom Seaver in 1969.


-Tim McCarver's arrival in Philadelphia pushed Ryan back to the bench, where he remained through the 1973 season. He was dealt to Pittsburgh in 1974, appeared in only 15 games, and retired at age 32.

-Of all position players since 1930, only shortstop Ray Oyler (.175) had a lower batting average with at least 1,000 career at-bats than Ryan.

-Mike lives with Suzanne, his wife of more than 40 years, in Wolfeboro, NH.

-Bill was born in Cincinnati, OH, the son of a hardware store owner. During his childhood, several Reds players worked for his father in the offseason, including Gus Bell, Johnny Temple, Ted Kluszewski, and Roy McMillan.

-He actually never played organized baseball growing up, as he failed to make the cut both in high school and in college at the University of Cincinnati. However, his father's connections proved valuable, as Red Sox scout Denny Galehouse took a flyer on Schlesinger for a $1,000 signing bonus in 1963.

-Incredibly, Bill not only made the cut with Boston's New York/Penn League team in Wellsville, NY, but was named a league All-Star. His resume included a .341 average, a .624 slugging percentage, 31 doubles, and league-leading totals of 129 runs scored and 37 home runs. He even stole 18 bases.

-The Red Sox invited him to major league camp in 1965, and he went north with the team. He suspects that he was chosen over Jerry Moses because the latter was a more highly-regarded prospect and the team did not want to hinder his development.

-Indeed, the BoSox did not use Schlesinger in a game until May 4, 1965. He pinch hit for pitcher Dave Morehead leading off the sixth inning, and tapped a comebacker to Angels hurler Marcelino Lopez, who threw him out at first base. In his SABR biography, the player offers an amusing retelling of this experience, complete with a wipeout on the dugout steps and a weighted donut that would not come off of his bat.

-He had no way of knowing at the time, but that one inauspicious at-bat was to be Bill's lone major league experience. He was placed on waivers three days later and claimed by the Athletics.

-The outfielder wound up back in Boston's farm system twice more in his career. He also played in the Cubs and Phillies organizations.

-In August of 1969, Bill was to be promoted to the major leagues by the Phillies, but was hit in the face by a Larry Sherry pitch while still at AAA. He couldn't see at all for a few days afterward, and ultimately lost 40% of his vision. He finally retired in the spring of 1971 after the Pirates sent him home from their camp.

-He returned home to Cincinnati and inherited Pleasant Ridge Hardware when his father passed away in 1972.

-Bill ended up playing slow-pitch softball for 25 years, and is in the Greater Cincinnati Softball Hall of Fame.

-A native of Yazoo City, MS, Jerry turned down a football scholarship from Bear Bryant at the University of Alabama and signed with the Red Sox for a $50,000 bonus in 1964.

-His father Sammy was a baseball scout for 25 years, working for the Pirates, Angels, and Dodgers.

-Bonus baby rules did force Boston to put Moses on the big league roster for three months in 1965. He had just four pinch-hit appearances all year, but the second of those came on May 25, 1965. That day, the rookie hit a booming home run off of Minnesota's Jim "Mudcat" Grant, who would win 21 games that season.

-His only career grand slam was the decisive blow in a 9-4 win over the Indians on April 20, 1969. The young catcher later doubled in an insurance run to give him a career-best 5 RBI on the day.

-The Red Sox traded Moses to the Angels in October of 1970, and he played for seven teams over the final six years of his career. The others were the Indians, Yankees, Tigers, Padres, and White Sox. In between, he was also the property of the Mets for a few months.

-Jerry retired after the White Sox released him in late 1975, looking for more economic security than a backup catcher could get in those days. In parts of nine seasons, he batted .251 with 25 home runs and 109 RBI.

-Though Moses hit only 25 career homers, he victimized two pitchers twice, and both were famous for giving up moon shots: Al Downing (who served up Hank Aaron's 715th in 1974) and Hall of Famer Bert Blyleven (who set a single-season record by surrendering 50 HR in 1986). 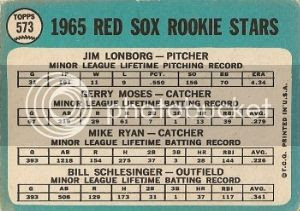