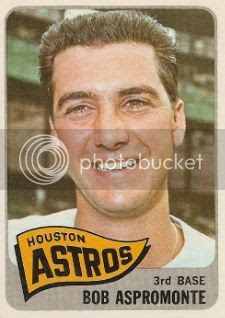 Hey look, it's Aspro the Astro! Bob Aspromonte is just lucky that Charley Finley didn't own the Houston team, or he probably would have asked him to replace that "p" with a "t". In other news, this is officially the last Astros card I'll be posting for the 1965 set. Thank goodness. If I had to look at one more bare-headed portrait with the drab gray border and logo-less pennant, I think I would've gone mad.

-Bob was born in Brooklyn, and signed with the hometown Dodgers in 1956.

-He was tabbed as a starting third baseman by the Houston Colt .45s after they took him in the expansion draft. Leading off for the club in their inaugural game on April 10, 1962, he went 3-for-4 with a walk, a steal, and three runs scored in an 11-2 rout of the Cubs. He's in the trivia books for the first base hit and the first run scored in franchise history.

-On June 10, 1968, there was a national day of mourning following the assassination of Robert F. Kennedy. Aspromonte and teammate Rusty Staub refused to play in that day's scheduled game, and were fined.

-Bob was traded to the Braves after the 1968 season, becoming the last of the original Colt .45s to leave the team. He spent two years in Atlanta and a season with the Mets before retiring in 1971. When he called it quits, he was the last of the Brooklyn Dodgers active in the major leagues.

-Aspromonte ran a Coors beer distributorship for many years, but is now retired. He still lives in Houston. 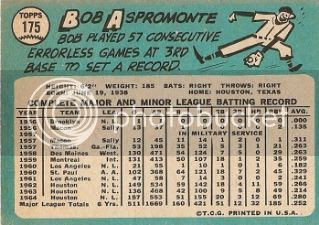