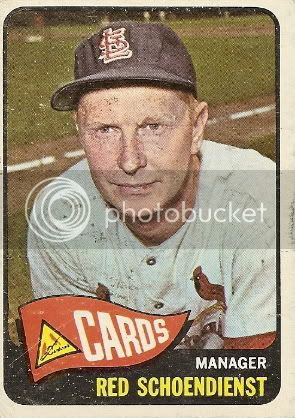 Red Schoendienst existed before baseball ever did. At least it seems that way. As for this card, ol' Red has an even spottier complexion than usual thanks to the wear and tear that have accrued over four decades. It will be a miracle if I don't misspell his name at least once in this post.

-Signed with the Cardinals in 1942, and was delayed in his debut by a stint in the Army in World War II (1944-1945). Despite being discharged with a serious eye injury and bum shoulder, he would be the starting left fielder in St. Louis months later.

-Led the National League with 26 steals as a rookie.

-Was an All-Star for the first time in 1946, hitting .281 with 28 doubles as he took over at second base for the World Champion Redbirds. He would eventually be a ten time All-Star, including eight straight seasons from 1948-1955 with honors.

-Handled 320 consecutive chances at second base without an error in 1950. Also led the league with 43 doubles that year.

-After nearly a dozen seasons in St. Louis, spent one year with the Giants before a June 1957 trade to the Braves gave him another chance to play for a contender. He took full advantage, leading the league with 200 hits and finishing third in MVP voting as the Braves won the pennant and went on to defeat the Yankees in the World Series.

-Hit .300 in the 1958 World Series rematch with the Yanks, but New York prevailed. His career wound down afterward, including a 1959 season lost to tuberculosis and a stint from 1961-1963 as a Cardinals player-coach.

-A very reliable contact hitter, never striking out more than 32 times in a season.

-Took over as Cards manager in 1965, and set a team record for longevity by staying at the helm through 1976. His 1967-1968 teams won back-to-back pennants, with the 1967 squad besting the Red Sox in the World Series. He returned as an interim manager in 1980 and again in 1990, and had a cumulative record of 1,041-955 (.522 win percentage). He has also served the club in subsequent capacities as a coach and front office assistant.

-Inducted into the Baseball Hall of Fame in 1989. 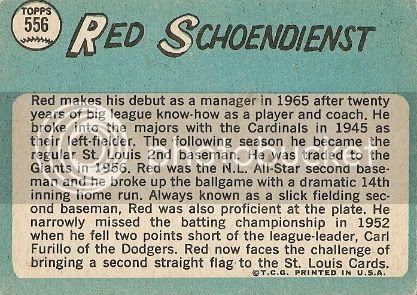