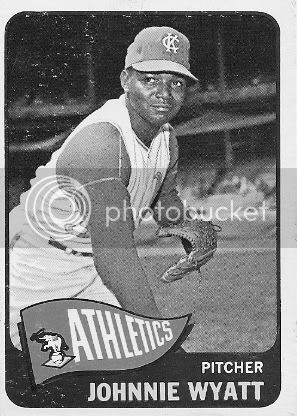 Well, I'm afraid we've finally come to the end of another batch of cards from the peerless Max. But don't worry...the next five cards I'll be covering also came from Max, and there are some really exciting selections in that group! For now, we'll try to focus on Johnnie Wyatt and his kelly green undershirt. My eye is drawn to the white seams in the shoulder area; it almost looks like he's wearing long johns, doesn't it?
Fun facts about Johnnie Wyatt:

-A Chicagoan by birth, John signed with the Cardinals in 1954.
-Early struggles in the minors and two years of military service (1957-1958) slowed his path to the major leagues.

-Made his only All-Star team in 1964 (9-8, 20 SV, 3.59 ERA). Set a major league record (broken in 1965 by Eddie Fisher) with 81 games pitched.
-A notoriously poor hitter, he was 4-for-83 for an .048 lifetime average. His only RBI came courtesy of a bases-loaded walk from Twins hurler Garry Roggenburk in 1965. It was an eventful inning; the A's scored four runs to boost their lead to 8-2, even though Wyatt was eventually thrown out at home plate by left fielder Ted Uhlaender! Wyatt also threw two perfect innings to pick up an easy save in relief of Catfish Hunter.

-Traded to Boston in mid-1966. Had a career year in 1967, going 10-7 with 20 saves, a 2.60 ERA, and a 1.18 WHIP for the American League Champion Red Sox. He pitched twice in the 1967 World Series vs. the Cardinals, earning the win in relief in Game 6 despite allowing a seventh-inning home run to Lou Brock to tie the game. A four-run Red Sox rally in the bottom of the inning was his saving grace.
-Finished his career back with the Athletics in 1969 after pitching for three teams the previous year (Red Sox, Yankees, Tigers). For his career, went 42-44 with 103 saves and a 3.47 earned run average. 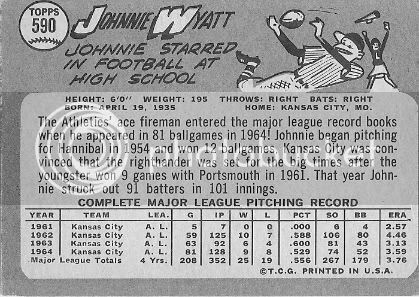