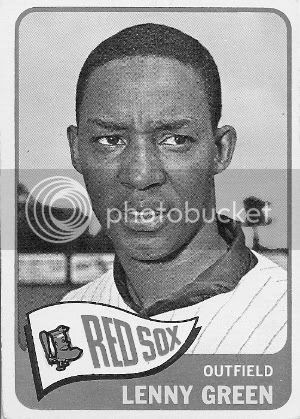 It's not every day that you see a Red Sox player in pinstripes, but as you've probably guessed, Lenny Green was a late pickup by Boston. He's something of an oddity, in that the team whose uniform he's actually wearing (the Twins) was three teams ago by the time the card was printed! Minnesota dealt him to the Angels in July of 1964, and Baltimore picked him up that September. On the verge of the 1965 season, the BoSox purchased his contract. It's enough to make your head spin.

-Signed with the Orioles as an amateur free agent in 1955.

-Tripled off of Cleveland's Mike Garcia for his first major league hit.

-Set a Twins record with a 24-game hitting streak in 1961, a mark that wasn't broken until 1980 when Ken Landreaux hit safely in 31 straight games.

-Played just six games with his hometown Detroit Tigers in 1968, ending his 12-year career as a .267 hitter. 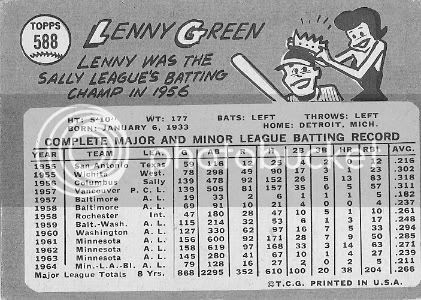