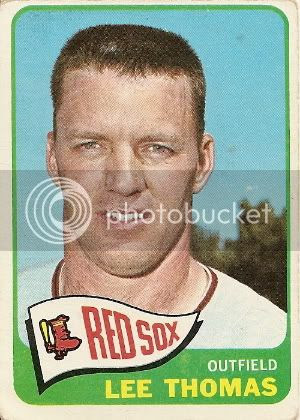 Lee Thomas is wearing his best half-sneer, half-grimace in this picture. Did Topps only take one picture of him that Spring, or were the rest even less flattering? He's pictured with Team Hatless thanks to a midseason trade from the Angels.
Fun facts about Lee Thomas:

-Born in Peoria, IL, James Leroy Thomas signed with the Yankees as an eighteen-year-old in 1954.
-Despite showing good power and a steady bat in the minors (.287 career AVG), Lee spent seven seasons in the Yankee organization before getting a whopping two at-bats with the big league club in 1961. The Bombers promptly swapped him to the brand-new Angels in a five-player deal.

-Late in his rookie season (Sept. 5, 1961), Lee had a monstrous game, hitting three home runs against the A's: a game-tying solo shot in the third inning, a grand slam in the sixth to bring the Angels within 9-6, and a three-run shot in the eighth to give them the lead. Amazingly, Kansas City came back to win 13-12 in the bottom of the ninth on a two-run homer from Bobby Del Greco.
-Hit .284 with 24 HR and 70 RBI in his first try with the Angels, earning a third-place share in Rookie of the Year balloting.

-Spent the 1969 season in Japan, playing for the Nankai Hawks.

-Worked for two decades in the Cardinals organization as a coach, minor league manager, and Director of Player Development. Helped build the teams that went to three World Series in the 1980s, winning it all in 1982.

-Served as general manager of the Phillies (1988-1997), acquiring players such as Lenny Dykstra, Curt Schilling, and Mitch Williams. In 1993, the Phils made it to the World Series, where they were bested by Toronto in six games. He went on to work in the Red Sox front office until 2003, then scouted for the Brewers and Astros. 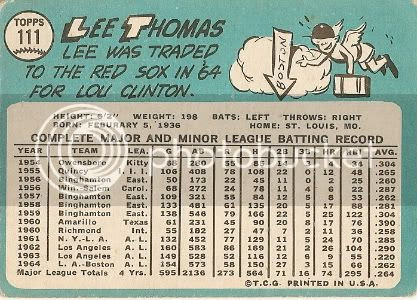