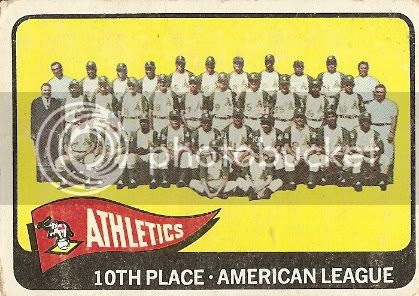 I appreciate the high visibility of the kelly green numbers on the Athletics' chests, as well as the white numbers on their green sleeves. It makes it much more feasible to identify individual players on a team card; for instance, I could tell you that the gentleman standing fourth from the right in the middle row is #25, Moe Drabowsky.

As I've mentioned in several individual player posts, the 1964 K.C. A's were just plain awful. The club started out 17-35, which cost manager Ed Lopat his job. They weren't any better under his replacement, finishing up 40-70 with Mel McGaha at the helm. Add it up and you get a 57-105 record, good for dead last in the American League and 42 games behind the first-place Yankees. Understandably, there weren't many people that were interested in seeing them play. 642, 478 fans came through the turnstiles at Municipal Stadium, and only the Senators drew smaller numbers than that.

The Athletics hitters didn't do much hitting, with a collective .239 average that was second-worst in the A.L. They did place third in the league with 166 home runs and 538 walks, though. Shortstop Wayne Causey batted .281 with 88 walks and 31 doubles, and first baseman Jim Gentile (28 home runs) and All-Star right fielder Rocky Colavito (34 HR, 102 RBI) supplied the lion's share of the power.

The pitching was a real weakness in Kansas City, as 12 of the 18 pitchers used by the team started at least one game and Orlando Pena led the club with 12 wins. John O'Donoghue was the only other hurler in double-digits, and the only pitchers with winning records were All-Star John Wyatt (9-8, 3.59 ERA, 20 SV) and reliever Wes Stock (6-3, 1.94 ERA, 5 SV). Overall, the club racked up a 4.71 ERA and was at the bottom of the league in hits, runs, walks, and home runs allowed. The less said about it, the better.

During the Athletics' brief stay in K.C. (1955-1967), they finished no higher than sixth place in the A.L. and lost 100 games in four seasons total. But by their second year in Oakland, owner Charlie O. Finley had assembled a contender. They had five consecutive trips to the postseason from 1971-1975, and won three straight World Series before the free agency era tore them down. 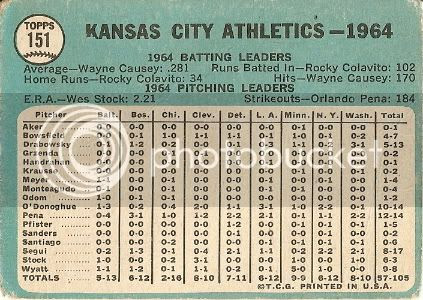