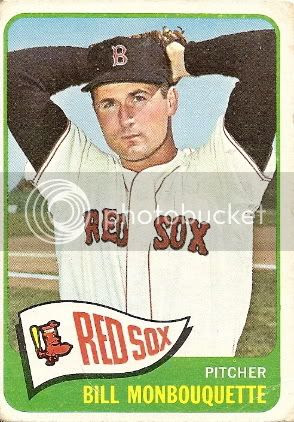 It's probably just as well that Boston didn't put player names on the backs of their jerseys in the 1960's. Can you imagine trying to squeeze all twelve letters of "Monbouquette" across the shoulders? The Red Sox clubhouse man certainly would have been earning his keep.

-Hailing from Medford, MA, Bill signed with the Red Sox in 1955. The day he signed, he wound up in a holding cell after he and his father got in an altercation with some soused fans who had spilled their drinks on his mother!

-After winning 37 games in three and a half minor league seasons, he debuted with the Red Sox in July of 1958. He acquitted himself well, completing three of his eight starts with a 3.31 ERA.

-Bill soon became the go-to guy on some poor Boston teams, averaging 14 wins a year from 1960 through 1965 with a 3.65 ERA and sixteen total shutouts. Also was a three-time All Star in that span.

-Set a team record for strikeouts in a game by fanning 17 Senators on May 12, 1961. Roger Clemens later surpassed him with 20 K's on two occasions...but who cares about that guy any more?

-Snapped a four-game winless streak by no-hitting the White Sox on August 1, 1962. He retired the last 22 batters after walking Al Smith in the second. Nearly as impressive was his 12-inning four-hit shutout of the Indians on April 11 of that year!

-In 1965, was the great Satchel Paige's last-ever strikeout victim in a major league game.

-Boston traded him to Detroit before the 1966 season, and he had a nondescript year-plus in Motown before joining the Yankees in May of 1967 and turning in a 2.36 ERA in 33 appearances (including 10 starts).

-Coached in the Mets and Tigers organizations, served as the Mets' major league pitching coach in 1982-1983, and managed in the minors for the Yankees and Mets for a year each.

-Was diagnosed with leukemia a few years ago, and is currently in remission. However, he needs bone marrow and stem cell transplants to keep the disease at bay. 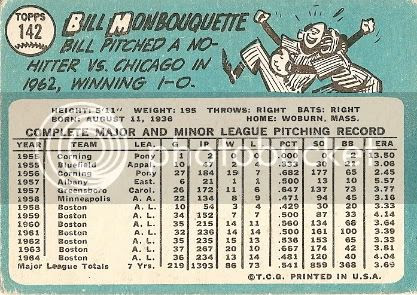