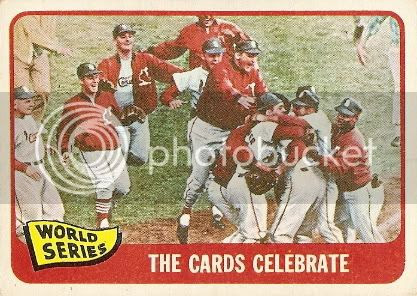 Back-to-back World Series cards, and this one skips over Game Seven and spoils the outcome. Oh well, it's all in the order that I received the cards. What we have here is a beautiful action shot of the St. Louis players leaping off of the bench and rushing the field after Bobby Richardson popped out to Dal Maxvill at second base for the final out in Bob Gibson's 7-5 complete game victory in Game Seven. The only player I can identify is Tim McCarver, who is in his catcher's gear and is at far left of the multi-player man hug. I really like those red satin Cardinals jackets with the bird in his batting stance, and I think it's a shame that the guy in the tan suit at top left and the gentleman in the green patterned shirt and light-colored pants at top right had their heads chopped off; I bet they were really something. It's too bad that security is so tight at sporting events these days (though it is completely understandable). The iconic images of two small boys greeting Bill Mazeroski as he rounded third base with the 1960 World Series-winning homer, or the enthusiastic and unkempt young gentlemen joining Hank Aaron for his 715th home run trot are truly a part of baseball history.
This was the Cardinals' first World Series trip and title since 1946, when they outlasted the Boston Red Sox in seven games. The Redbirds wouldn't have to wait as long for their next trip to the promised land, as they made back-to-back appearances in the Fall Classic in 1967-1968. In both of those years, the series again went seven games; the former a victory over the Red Sox, and the latter a defeat to the Detroit Tigers. 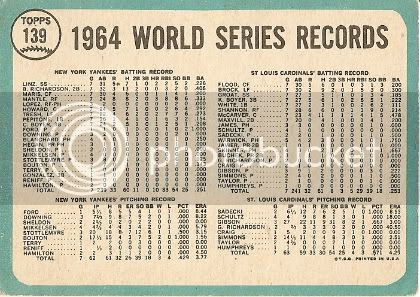