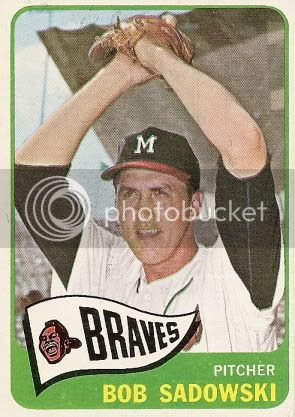 Wow, it's been three weeks! I didn't intend to take a lengthy break from this blog, but to be fair, I was on vacation for one of those weeks with very limited Internet access. Anyway, let's get back on the horse with Bob Sadowski. That's a very interesting backdrop behind Bob. I think that's a stadium overhang, and to my untrained eye it looks like Chavez Ravine. But as always, I welcome any corrections you may have to offer.
Fun facts about Bob Sadowski:

-A Pittsburgh native, he signed with the Cardinals in 1958 at age twenty.
-Baseball was the family business: his brothers Ed and Ted and nephew Jim all played in the majors as well.

-Twirled his only career shutout on September 5, 1963, blanking the Pirates on eight hits and striking out a dozen.
-Was useful in his sophomore season as a swingman, going 9-10 with a 4.10 ERA, five saves, and five complete games.

-Tied a major league record by striking out in all five at-bats on April 20, 1964.
-Started the last ever home opener for the Braves at Milwaukee's County Stadium, beating the Cubs 5-1 on April 15, 1965. 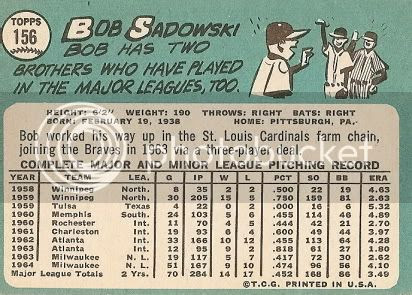