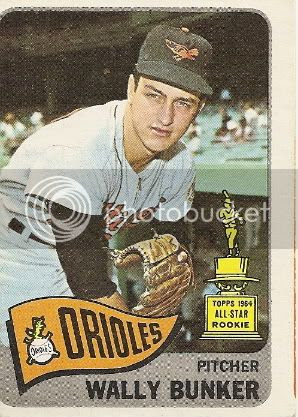 This is what card collecting is all about. An Oriole, a Rookie Cup, and an impressively miscut piece of cardboard. Oh yeah.

-Originally from Seattle, Bunker signed with the Orioles in 1963.

-Went 10-1 with a 2.55 ERA at A-level Stockton in his first pro season to earn a September promotion to Baltimore. He was just eighteen at the time!

-Made the big league club out of Spring Training in 1964 and had an incredible rookie season, leading the O's with a 19-5 record, a 2.69 ERA, and a 1.04 WHIP. His .792 win percentage led the American League. It's hard to believe that he finished a distant second in Rookie of the Year balloting, but winner Tony Oliva's .323 average, 32 home runs, and 94 RBI were pretty persuasive. However, Wally was The Sporting News' AL Rookie Pitcher of the Year.

-Wally was known for a sharp sinker; Mickey Mantle said that it was a pitch "you could break your back on". The Mick went 2-for-9 (.222) with one RBI vs. the young righty.

-Unfortunately, he came up with a "sore arm" (likely torn tendons or ligaments that went undetected) in 1965, and injuries would severely affect his career thereafter. He did win 10 games in that season and the following one, but his earned run average climbed steadily.

-Wally had one last moment in the sun with the Orioles in the 1966 World Series, twirling a 1-0 shutout of the Dodgers on six hits. He struck out six batters in the second of three consecutive whitewashes by the young Baltimore pitchers, who stunned the favored L.A. team in a four-game sweep.

-After health woes limited Bunker to 159 innings combined in 1967 and 1968, the Birds left him unprotected in the expansion draft. He was claimed by the Royals, and threw the first pitch in team history the following April.

-In 1969, Bunker tossed the last of three career one-hitters. However, there wasn't much drama in those games. Jay Johnstone's single to lead off the seventh in the September 11, 1969 game was the deepest that Wally went into one of his gems without surrendering a hit. 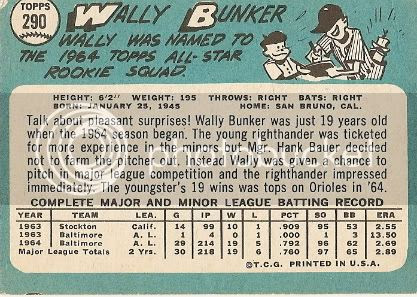