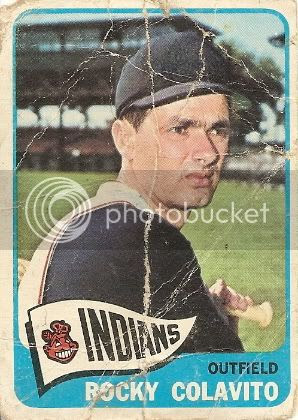 Ayyy, Rocky! By virtue of the multiple creases criss-crossing its front, the astounding discoloration of the back, and the paper-thin texture (take my word on this one), this card is the shabbiest in my 1965 Topps set. Don't mistake my tone; I see it as a badge of honor. Forty-five year-old cards shouldn't be immaculate.

-A New Yorker by birth, Rocky signed with the Indians in 1950 when he was just 16 and had a slow-but-sure five-year climb through the minors, belting 150 home runs in 718 games.

-Made an impact as a rookie with 21 home runs and a .372 on-base percentage. It was the first of eleven straight 20-homer seasons for him. He soon became popular with Cleveland fans for his booming hits, strong throwing arm, and good looks and friendly personality.

-Surprisingly, only topped the A. L. in home runs once (42 in 1959). He made the All-Star Game for the first of six years. He also tied a record by going deep in four straight at-bats on June 10, 1959. The feat was more impressive than it seemed, as he accomplished it in spacious Memorial Stadium in Baltimore.

-Was surprisingly traded to the Tigers after the 1959 season, in a straight-up "challenge trade" for singles-hitting shortstop Harvey Kuenn. The latter struggled and lasted one season with the Tribe. Meanwhile, Rocky reached career highs of 45 HR, 140 RBI, and 129 runs scored with Detroit in 1961. However, he was highly scrutinized in Motown and moved on to Kansas City for the 1963 season.

-The Indians compounded their original mistake of trading Colavito by giving up too much to reacquire him in a three-team trade with the A's and the White Sox. Gone from Cleveland were youngsters Tommie Agee and Tommy John, both of whom you may know.

-Rocky did have two more solid years in his second trip through Cleveland, topping the league in RBI (108) and walks (93) in 1965 and bashing 30 homers the following year.

-In his final two years in the majors, the slugger bounced from the Indians to the White Sox to the Dodgers to his childhood favorites, the Yankees. With the Yanks, he actually earned a win with two and two-thirds scoreless innings of relief against the Tigers on August 25!

-Rocky currently lives in Berks County, PA and was inducted into the Indians Hall of Fame in 2006. 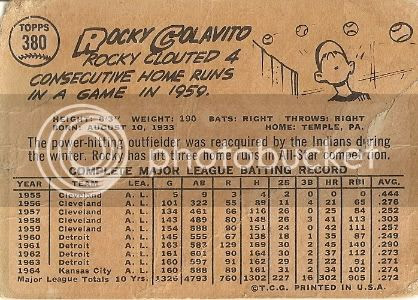