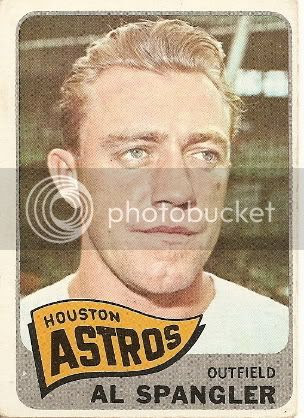 Whoa! Check out the pompadour on Al Spangler. Do you think he used pine tar as a pomade? That's some impressive hold.
Fun facts about Al Spangler:

-Hailing from Philadelphia, Al played college ball at Duke University before signing with the Braves in 1954.
-Played sparingly for the Braves between 1959 and 1961 but played well, batting .276 and getting on base at a great .398 clip.

-Drove in the first run in Colts/Astros history with an RBI triple on April 10, 1962, plating Bob Aspromonte.

-Jack Hamilton was probably not his favorite pitcher; Al went 0-for-15 with three walks against Hamilton in his career!

-Despite a reputation as a slap hitter, six of his 21 career home runs led off a game.

-After a brief stay with the Angels, returned to the National League as a bench player and sometimes coach for the Cubs (1967-1971). 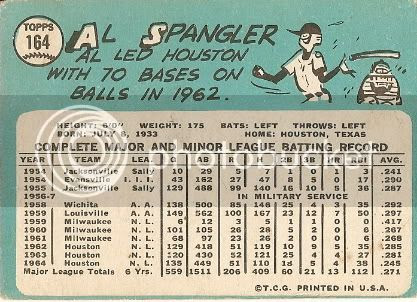