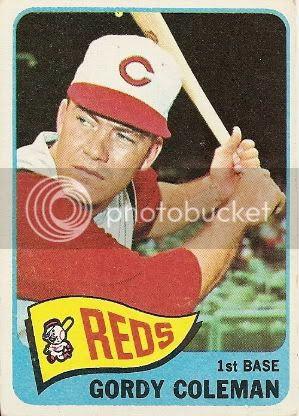 I can say without hyperbole that Gordy Coleman is the most accomplished player named "Gordy" in major league history. The only other Gordy was infielder Gordy Lund, who played just 23 games in the late 1960s.

-Born in Rockville, MD, Gordy signed with the Indians as a teenager in 1953.

-Traded to the Reds in an offseason deal that sent All-Star second baseman Johnny Temple to Cleveland, Gordy spent the first half of 1960 in the minors before being recalled in late July. He hit .271 with 32 RBI in 66 games in Cincy and was in the majors to stay.

-His two-run homer off of Ralph Terry gave Cincinnati the lead in the fourth inning of Game Two of the '61 World Series. They would win the game 6-2, their only victory in that year's Fall Classic.

-Hit a career-best 28 home runs the next season and drove in 86.

-Gordy was inducted into the Reds Hall of Fame in 1972. In the early 1990s, he provided color commentary on Reds game broadcasts, up until his untimely death at age 59 in 1994. 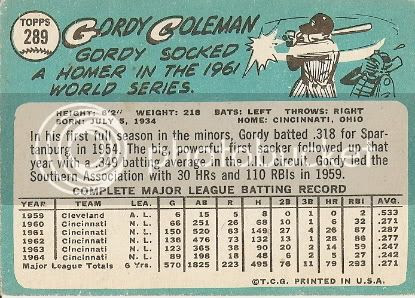