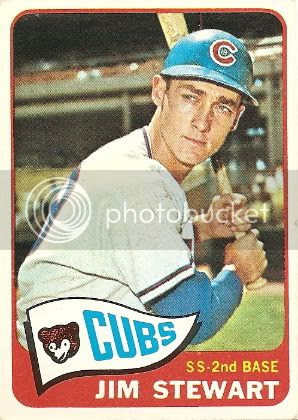 Oh, hey! I loved this guy in Vertigo and Mr. Smith Goes to Washington!
...What do you mean, it's not that Jim Stewart?
Fun facts about Jim Stewart:
-Born in Opelika, AL, Jimmy played collegiately at Austin Peay State University before signing with the Cubs in 1961.
-After batting .289 in his first three pro seasons, Stewart debuted with Chicago in September of 1963 and compiled a .297 average in 13 games.
-His first two major league hits came on September 10 of that year against Bob Gibson. He doubled off of the future Hall of Famer in his first trip to the plate that day!
-Jimmy came up as a shortstop but made his mark as a supersub, playing every position on the diamond except for pitcher.
-1964 was the only season in which he topped 300 at-bats. He hit .253 with 17 doubles, 33 RBI, and 49 walks in 132 games that year.
-Stewart struggled at bat in the mid-1960s and spent most of the period from 1966-1968 in the minors with the Cubs and White Sox.
-The Reds drafted him from the Pale Hose and he settled into a bench role, hitting .252 with Cincy from 1969-1971 and seeing a bit of action in the NLCS and World Series in 1970.
-His pinch three-run home run off of Tom Seaver gave the Reds a 7-5 lead in the nightcap of an August 23, 1970 doubleheader. It was the decisive blow in a Cincinnati win.
-Was traded to the Astros in the big eight-player deal that sent Lee May to Houston and brought Joe Morgan to Cincinnati; was a sub-Mendoza batter for two more seasons before calling it quits. 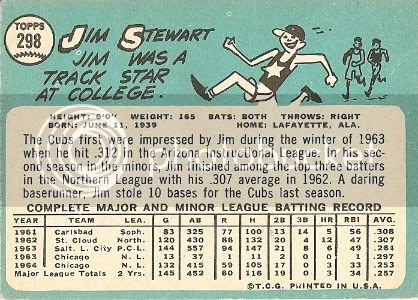