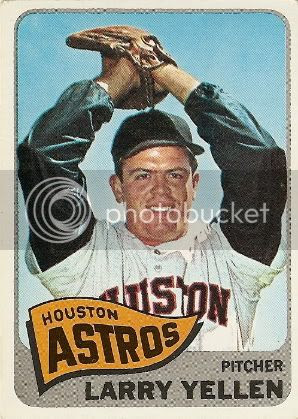 Hey, here's something rare for this set! A visible jersey for a Houston player! It's a breath of fresh air after all of those bare-headed portraits. While Topps was reluctant to show players in the discontinued Colt .45s caps and home jerseys, the road jerseys that just had the city name in block letters were probably fair game. Maybe they could have gone to greater lengths to find more photos of Houstoners in gray, hmm?

-A Brooklynite by birth, Larry attended the City University of New York's Hunter College campus before signing with Houston in 1963.

-The Colts promoted Yellen to the big leagues and he made one start on September 26, 1963. He allowed four runs (two earned) in five innings and received no decision.

-Recalling his debut against Pittsburgh years later, he recalled a hard-hit ground ball by Roberto Clemente that almost knocked shortstop Glenn Vaughan into the stands. The backup infielder managed to hold on to the ball and throw Clemente out. Though the young pitcher allowed seven hits total, he held the future Hall of Famer hitless in three tries.

-Yellen, a Jewish ballplayer, delayed his scheduled debut start by one day to observe Yom Kippur. Somehow it was a much bigger deal when Sandy Koufax made a similar sacrifice.

-Larry began 1964 in the majors, but pitched sparingly and ineffectively in relief and spent much of the second half at AAA Oklahoma City. He racked up a 6.86 ERA in 21 big league innings that year.

-He returned to the minor leagues in 1965, going 3-12 between AA Amarillo and AAA Oklahoma City.

-After 1965, there is no record of Larry Yellen having pitched again, nor did I turn up any explanation for his pro career ending at age 22. He had a 6.23 ERA and no wins, losses or saves in 14 career games. 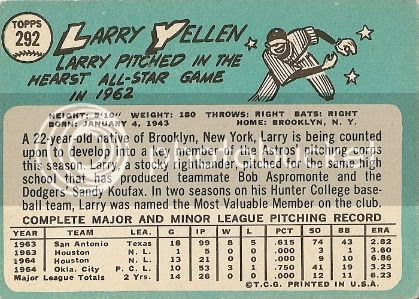