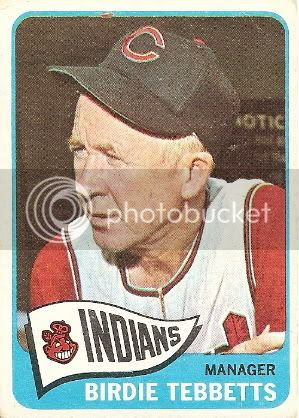 I tend to agree with Bill Simmons that certain sports nicknames can and should be recycled after an appropriate period of time. "Night Train." "Catfish." I would say that there's always a room in sports for "Birdie". Tebbetts was given that moniker as a child, when his aunt remarked that his high-pitched voice was reminiscent of a bird chirping. By the by, you'll notice that Topps misspelled his last name on the back of the card, but not the front. Pretty sloppy, fellas.
Fun facts about Birdie Tebbetts:

-Born George Robert Tebbetts in Burlington, VT, he earned a degree in philosophy from Providence College in 1934 and signed with the Tigers that summer.
-Debuted with Detroit in 1936, and earned the starting catcher's job in 1939 after hitting .294 the previous season.
-While with the Tigers, he was involved in a bizarre incident. During a late 1940 game in Cleveland, a fan dropped a crate of tomatoes over the railing of his section. It landed on Birdie's head in the bullpen and knocked him out cold. When he recovered, the police brought him to the fan, who they had nabbed. With the tacit approval of the cops, the wounded catcher punched his assailant in the face.

-His .296 average and work behind the plate helped the Tigers reach the World Series in 1940, but he went hitless in 11 at-bats in the Fall Classic as the Reds eked out the championship.
-Made consecutive All-Star appearances in 1941 and 1942, but missed the following three-and-a-half seasons while serving in the Air Force.

-Was traded to the Red Sox in early 1947 and played his best ball with them despite being in his mid-thirties. Batted .287 in Beantown and added two more All-Star nods to his resume.
-Finished his playing career as a backup in Cleveland. In parts of 14 seasons he hit .270 with 38 home runs and 469 RBI.

-Tebbetts was known for being outspoken and honest to a fault. The Red Sox traded him shortly after he referred to his teammates as "moronic malcontents" and "juvenile delinquents". While scouting for the Reds in 1953, he gave the following report on a young pitcher: "Major league stuff and a great arm. Screwy in the head. Eliminate head and I recommend him. Get good surgeon." 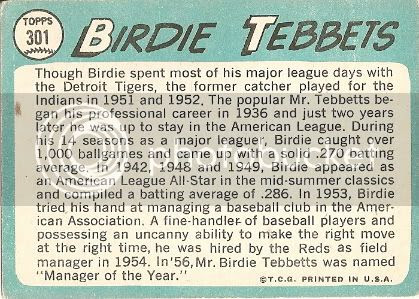