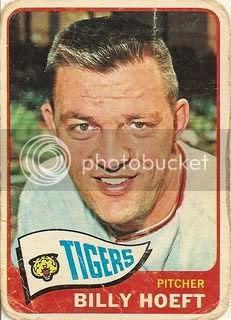 Believe it or not, this is the LAST card I have in the hopper to post! It could be a while before I get ahold of those 17 elusive cards that stand between me and completion, so the updates are going to be less frequent than they have been in recent months. However, I'm thinking that I might go back and give the first few card posts a re-do, since it took a while for me to focus more in-depth on each individual featured player. So this isn't goodbye, it's just "smell ya later".

Anyhow, this finely rounded card comes from Ed. Billy Hoeft is hatless player number 1,345 (an approximate guess) in the set, having gone from the Braves to the Tigers in the offseason. By the time the card was in stores, it was already outdated; Detroit released Hoeft before the season started, and he joined the Cubs in May 1965. Whoops!

-Billy was born in Oshkosh, WI and signed with the Tigers out of high school in 1950.

-On September 7, 1953, he went the distance in a 4-2 win over the White Sox. He scattered eight hits and performed a rare feat by striking out the side (Jim Rivera, Mike Fornieles, and Chico Carrasquel) on just nine pitches in the top of the seventh inning!

-After taking his lumps for a few years, the light went on for Hoeft in 1955. He led the American League with 7 shutouts en route to a team-best 16-7 record, 2.99 ERA, and 133 strikeouts. He also made the only All-Star team of his career.

-He hit two of his three career home runs on July 14, 1957, driving in three runs to help his own cause in a complete game 10-2 win over Hal Brown and the Orioles.

-He was unable to build on his early successes, and found himself working mostly out of the bullpen for three teams in 1959, going from Detroit to Boston to Baltimore. 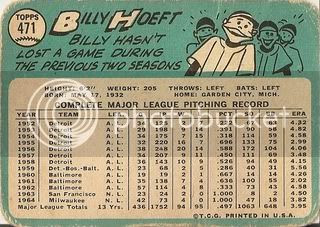