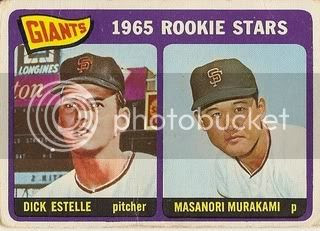 I told you this was a Giants-centric week! (Sorry, Night Owl.) Ed performed his '65 Topps wingman duties well again, picking up this fine card for $5 at a card show in Virginia back in July. Dick Estelle is another extremely airbrushed-looking player, but Masanori Murakami appears to be the real deal.

-Dick never pitched again in the big leagues. He stayed active in the minors through the 1972 season, finishing with a 102-123 record and a 3.67 ERA in parts of 13 minor league seasons.

-Masanori was born in Otsuki, Japan. His father wanted him to become a doctor, and only permitted him to play baseball if he agreed to continue studying diligently. He appeared briefly for the Nankai Hawks in 1963 before being sent to the Giants as part of a development deal between the two clubs.

-Working out of the bullpen at Class A Fresno, Murakami appeared in 49 games in 1964, going 11-7 with an excellent 1.78 ERA and 0.93 WHIP. The Giants promoted him to the big leagues in September.

-The 20-year-old became the first Japanese player in the major leagues and endeared himself quickly to fans and teammates, bowing to his fielders when they made good plays behind him. He strung together eight scoreless appearances to begin his career. He picked up the aforementioned save in Dick Estelle's only career win, and added a win of his own with three innings of one-hit relief against Houston on September 29. He allowed his only 3 runs in his final appearance on the year, finishing with a 1.80 ERA in 15 innings.

-Though the Giants expected to have his services again in 1965, the Hawks insisted that he had only been loaned to the American club and the two teams and their respective leagues engaged in a war of words. An agreement was finally brokered that allowed Murakami to return to San Francisco in early May.

-At the insistence of his father, he returned to Japan and the Hawks in 1966. He struggled under high expectations and was criticized for supposed bad "American" habits. He pitched in Japan through the 1982 season, finishing his career with a 103-82 record (largely on the strength of an 18-4, 2.38 ERA season in 1968) and a 3.64 ERA.

-He attended spring training with the San Francisco Giants in 1983, but did not make the team at age 38 and chose to go back to Japan. This left his major league record at 5-1 with 9 saves and a 3.43 ERA. 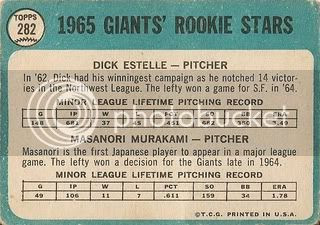