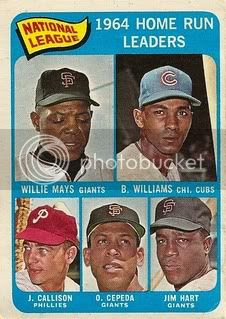 Wow, not only is this a crowded league leaders card, it's also continuing a very Giants-centric week here on the ol' blog. Ed picked up this card for me a few weeks back, and as you can see if you scroll down, I'm dealing with a little paper loss on the back. So I'll be looking to upgrade sooner rather than later.

In 1964, Willie Mays continued his display of sustained excellence by clouting 47 home runs, thereby winning his third of four career National League crowns. The 33-year-old Giant had won his first homer title a full decade earlier, going deep 51 times in 1955. He would surpass that previous career high in 1965, leading the Senior Circuit one last time with 52 big flies. He retired in 1973 with 660 home runs, then the third-highest total in history. He was of course bumped down to fourth by the current home run king, his godson Barry Bonds.

Sweet Swingin' Billy Williams was a distant runner-up with 33 round-trippers, a new career high for the 26-year-old Cub. It was the fourth in an impressive string of 13 consecutive 20-homer seasons for Williams. He never captured a home run title, but peaked with 42 homers in 1970. He collected 426 four-baggers in an 18-year career.

The three-man logjam on the bottom row of this card represents a three-way tie for third in homers in the National League. Johnny Callison's 31 dingers were one shy of the career high he'd establish in 1965; he never even hit 20 afterward, but wrapped up his career in 1973 with 226 total. For Orlando Cepeda, 31 was actually his lowest HR output since 1960. However, he also missed 20 games early in the season. He peaked at a league-leading 46 in 1961 and wound up with 379 in a Hall of Fame career. Jim Ray Hart's 31 longballs were the first 31 of his career, earning him a second-place Rookie of the Year finish. He topped out at 33 in 1966, but his prime was short; he played 1,125 games lifetime and accumulated 170 homers.

If you could see the card back, you'd find the top 24 power hitters of 1964 in the N.L., all the way down to Willie McCovey with 18. The grand slam rundown is also provided, with only Bob Aspromonte and league MVP Ken Boyer hitting two grannies. The two most surprising names on the list (in my opinion) are Charlie Smith with 20 HR, and Billy Cowan with 19.