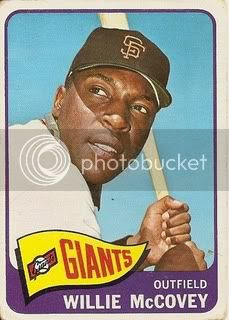 Whaddaya know, it's Stretch! This card set me back a cool five bucks, thanks to the bargain-hunting talents of Ed. If you're paying attention to the sidebar, you'll have noticed that I am now just 17 cards shy of a completed set, which brings with it several exciting signposts. For instance, I have completed the Giants team set, 30 cards in all. That's a big deal to me in itself, but especially considering that it includes five future Hall of Famers.

-He kept up the pace in his first look at the major leagues, putting up a line of .354/.429/.656 with 13 homers and 38 RBI in just 52 games in San Francisco. He was the unanimous winner of the National League Rookie of the Year award despite playing just one-third of the season!

-Despite his prodigious power and on-base skills, McCovey found it hard to get into an everyday lineup that included Orlando Cepeda, Willie Mays, Felipe Alou, and Harvey Kuenn. He did not top 106 games in a season until 1963. That year, he made the first of 6 All-Star teams, leading the league with 44 home runs and driving in 102 runs (trailing only Mays' 103 for the team high). He also batted .280 and scored 103 runs.

-Willie batted .429 (6-for-14) with 2 home runs and 6 RBI in a losing effort in the 1971 NLCS. His two-run homer off of Steve Blass in Game One gave the Giants the eventual winning runs in their only victory over the Pirates in the Series.

-He punished fellow Hall of Famer Don Drysdale, batting .336/.437/.680 with 12 home runs and 31 RBI in 151 plate appearances lifetime. This prompted Drysdale's former teammate Don Sutton to say that Mac was the only batter who was able to physically intimidate the great pitcher.

-Among his post-retirement honors, his #44 was retired by the Giants, and the club erected a statue in his likeness across from AT&T Park. The body of water beyond the right-field fence has been named McCovey Cove, as the lefthanded slugger used to deposit home runs beyond the right field bleachers in old Candlestick Park. He was a first-ballot Hall of Famer in 1986, and he currently works as a senior advisor for the Giants. 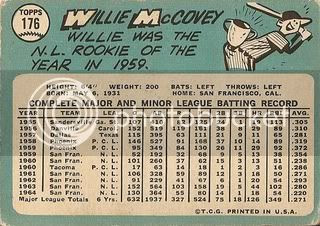