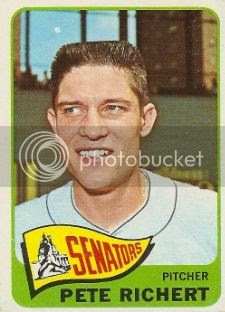 Topps does its capless thing again with Pete Richert, since he'd just been traded from the Dodgers in the big seven-player trade that also sent Frank Howard and Ken McMullen to DC. Los Angeles only got two players (and $100,000 cash, which ain't nothing), but one of those men was Claude Osteen, so they did alright. Anyhow, I'd appreciate a little less zoom on Pete. There's something about his spiky crew cut and big, toothy grin that's a bit unsettling to me. But maybe I'm off-base here.

-A native of Floral Park, NY, Pete signed with the Dodgers as a teenager in 1958.

-He debuted with the Dodgers on April 12, 1962, earning the win with 3.1 innings of scoreless relief after starter Stan Williams was chased in the second inning. In Richert's first full inning, he set a big league record with four strikeouts, victimizing Frank Robinson, Gordy Coleman, Wally Post, and Johnny Edwards. Coleman reached base when catcher Johnny Roseboro committed a passed ball on strike three, enabling the rare feat. Overall, the rookie struck out seven and allowed no hits or walks.

-Jockeying for mound time on a staff that boasted Koufax, Drysdale, and Johnny Podres, Pete totaled 194 innings in three seasons in L.A. He posted a middling 4.18 ERA and 1.47 WHIP, then was dealt to the Senators.

-On April 24, 1966, the southpaw struck out seven straight Detroit batters and whiffed 12 overall in six innings. He also took the loss, as Bill Monbouquette tossed a shutout for the Tigers.

-Pete was unscored upon in the postseason, appearing in the 1969 ALCS and the 1969, 1970, and 1971 World Series. For whatever reason, he was also barely used, facing just nine batters total and accumulating two innings of work. But he did earn a save in the opener of the 1970 Series, replacing Jim Palmer with two outs in the ninth and the tying run on first base in the form of Pete Rose. The reliever induced a liner to shortstop off the bat of Bobby Tolan, and the stage was set for Baltimore's five-game triumph over the Reds.

-Richert finished his career with a three-year stint in the National League, returning to the Dodgers for 1972-1973 and splitting the 1974 campaign between the Cardinals and Phillies. In 13 major league seasons, he was 80-73 with 51 saves and a 3.19 ERA.

-He spent more than a decade as a minor league pitching coach in the Oakland and San Francisco organizations. 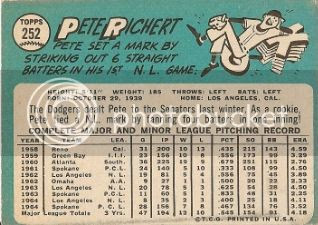