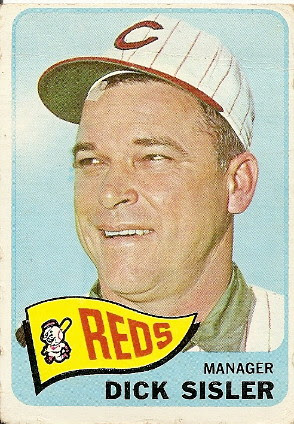 This happy camper is Dick Sisler. If the surname sounds familiar, it's probably because his father was George Sisler, the Hall of Fame first baseman and .340 hitter. Baseball was truly a family affair, as Dick's brother Dave was a big league pitcher from 1956 through 1962. Another brother, George Jr., was an executive in the International League (AAA) for several years.

Dick's own playing career was interrupted by World War II, and he didn't make his major league debut until 1946. He split his time between first base and the outfield for the Cardinals, Phillies, and Reds. Sisler's best effort came in 1950, when he hit .296 with 29 doubles, 13 home runs, and 83 RBI for the N.L. Champion Phillies. For his career, he was a .276 hitter in eight seasons. After his playing career ended, Dick got into managing, helming both the AA Nashville Vols and the AAA Rainiers.

In 1961, Dick joined the Reds' coaching staff under manager Fred Hutchinson. Unfortunately, Hutchinson was diagnosed with chest cancer months before the start of the 1964 season. He stayed on as manager while undergoing chemotherapy, but the treatment and constant travel proved too draining. When he stepped down on August 13, coach Sisler was promoted to replace him. (This made Dick half of the first father-son managing duo in major league history.) At that time, Cincinnati was in the thick of the pennant race at 60-49, four games back of the Phillies in third place. The team seemed to tread water down the stretch, and a loss to the Cubs on September 15 dropped them to fourth, eight-and-a-half games back. But Sisler's charges caught fire, winning nine straight beginning on September 2o to vault into first place. The Reds' stay at the top was short-lived; after three days in the catbird seat, the club lost four of their last five to finish heartbreakingly short. All told, they went 32-21 under the interim manager and placed one game behind the eventual World Champion Cardinals. To compound the pain in Cincinnati, Fred Hutchinson lost his battle with cancer shortly thereafter.

Dick was retained for the 1965 season, and the Reds were again competitive, staying within five-and-a-half games of first place all season long and pulling into a tie atop the National League standings with a September 1 doubleheader sweep of the Braves. However, Cincinnati again faded at the end, sliding down to a fourth-place finish at 89-73, eight games behind the Dodgers.

Sisler was not brought back for a third year as Reds' skipper. His replacement, Don "Jeep" Heffner, went 37-46 before being supplanted in midseason by Dave Bristol. Dick, meanwhile, returned to coaching, first with the Cardinals (1966-1970) and later with the Padres (1975-1976) and Mets (1979-1980). He also served as an instructor in the Cards' organization. He passed away at age 78 in late 1998 after struggling with pneumonia.

Fun fact: On the last day of the 1950 season, Sisler clinched the pennant for the Phillies with an opposite-field three-run homer in the tenth inning against the Dodgers. The heroic feat earned him a mention in Ernest Hemingway's novel The Old Man and the Sea. 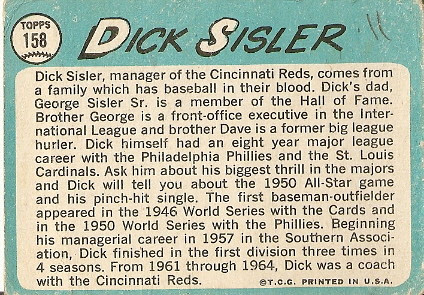