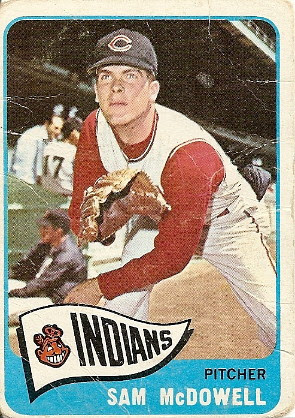 Check out the scowl on "Sudden" Sam McDowell's face as he unleashes an imaginary fastball toward some unlucky hitter! To the best of my recollection, this is also the first card from the set in which you can pretty clearly identify another player in the background. A quick check of the Indians' 1964 roster shows #17 as...Chico Salmon? That doesn't seem right. There's a chance that it could be a 1963 photo, in which case Mike de la Hoz was #17. That's more likely once you look at this suspiciously similar 1964 Topps card. But enough of that.

Towering over most of his peers at 6'5" and more than 200 pounds, Sam McDowell did most things hard and fast. Signed by the Tribe before his 18th birthday, the native of nearby Pittsburgh made his Indians debut in 1961, at the end of his second pro season. He struck out batters by the handful, but wallked nearly as many. That probably contributed to his tentative grasp on a roster spot; Sam did not spend a full season in the bigs until 1965. He started to put things together in 1964, when he went a combined 19-6 at Portland and Cleveland and posted a 2.70 ERA in the majors.

1970 was McDowell's finest all-around year on the mound. He went 20-12 with 19 complete games, a 2.92 ERA, and 304 strikeouts. It was the fifth and last time he led the league in K's, with all five crowns coming in a six-year span. He was rewarded by The Sporting News, which named him Pitcher of the Year.

After following up with a down year by his own standards (13-17, 8 CG, 192 K, 3.40 ERA, 1.46 ERA), Sam found himself as one half of a challenge trade. He was sent to the Giants for fellow All-Star pitcher Gaylord Perry. The Indians would soon find that they had gotten the better of the deal; Perry won 72 games in three-and-a-half years in Cleveland and then netted them Jim Bibby, Rick Waits, Jackie Brown, and $100,000 in a trade with Texas. McDowell, sadly, was already running out of gas. He won just 11 games with an ERA near 4.50 before San Francisco cut their losses and sold him to the Yankees in June 1973. The lefty had a mediocre 29-game stint with the Yankees before coming home to Pittsburgh in 1975. Then 32 years of age, he posted a 2.86 ERA in 34 and two-thirds innings (mostly in relief) as a swan song to his career.

Sam McDowell was a force to be reckoned with in his prime, which helped him to 141 career wins and 103 complete games. He struck out 2,453 total batters, and his ratios of 8.86 K/9 IP and 7.03 H/9 IP are each still ninth-best all-time. Of course, a more disciplined approach may have lengthened both his peak and his career as a whole. He did top the league in walks allowed on five occasions, and in wild pitches thrice. It's also been said that his considerable appetite for alcohol hastened his decline. After his career ended, the drinking worsened, costing him his family. In the early eighties McDowell, deeply in debt, managed to rehabilitate. He repaid his creditors, earned a degree in sports psychology and addiction from the University of Pittsburgh, and found work as a counselor for the Rangers, Blue Jays, and eventually for the Major League Baseball Players' Alumni Association. He remarried in 2001 and started a retirement community in Florida for ex-players.

Fun fact: The character of Sam Malone, the alcoholic ex-Red Sox pitcher played by Ted Danson on the popular sitcom Cheers, was based on Sam McDowell.

Bonus fun fact: Sam played one-third of an inning at second base and two-thirds of an inning at first base in 1970, as manager Alvin Dark switched back and forth between the lefthander and righty Dean Chance. In the former instance, he even recorded a putout, taking a throw from third baseman Eddie Leon to force Frank Howard at second! 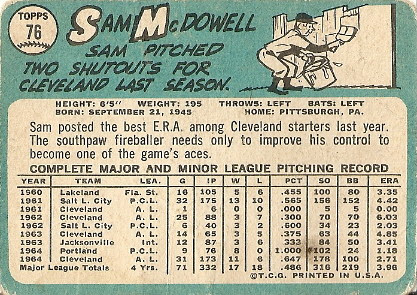